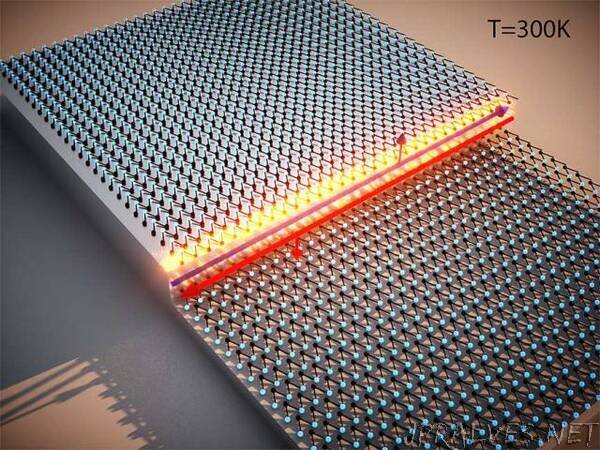 “For the first time, physicists have observed novel quantum effects in a topological insulator at room temperature. This finding opens up a new range of possibilities for the development of efficient quantum technologies, such as spin-based electronics, which may potentially replace many current electronic systems for higher energy efficiency.

The breakthrough, published as the cover article of the October issue of Nature Materials, came when Princeton scientists explored a topological material based on the element bismuth.

The scientists have used topological insulators to demonstrate quantum effects for more than a decade, but this experiment is the first time these effects have been observed at room temperature. Typically, inducing and observing quantum states in topological insulators requires temperatures around absolute zero, which is equal to minus 459 degrees Fahrenheit (or -273 degrees Celsius).

In recent years, the study of topological states of matter has attracted considerable attention among physicists and engineers and is presently the focus of much international interest and research. This area of study combines quantum physics with topology — a branch of theoretical mathematics that explores geometric properties that can be deformed but not intrinsically changed.

“The novel topological properties of matter have emerged as one of the most sought-after treasures in modern physics, both from a fundamental physics point of view and for finding potential applications in next-generation quantum engineering and nanotechnologies,” said M. Zahid Hasan, the Eugene Higgins Professor of Physics at Princeton University, who led the research. “This work was enabled by multiple innovative experimental advances in our lab at Princeton.”

The main device component used to investigate the mysteries of quantum topology is called a topological insulator. This is a unique device that acts as an insulator in its interior, which means that the electrons inside are not free to move around and therefore do not conduct electricity. However, the electrons on the device’s edges are free to move around, meaning they are conductive. Moreover, because of the special properties of topology, the electrons flowing along the edges are not hampered by any defects or deformations. This device has the potential not only of improving technology but also of generating a greater understanding of matter itself by probing quantum electronic properties.

Until now, however, there has been a major stumbling block in the quest to use the materials and devices for applications in functional devices. “There is a lot of interest in topological materials, and people often talk about their great potential for practical applications,” said Hasan, “but until some macroscopic quantum topological effect can be manifested at room temperature, these applications will likely remain unrealized.”

Why temperature matters
Ambient or high temperatures create what physicists call “thermal noise,” which is defined as a rise in temperature such that the atoms begin to vibrate violently. This action can disrupt delicate quantum systems, thereby collapsing the quantum state. In topological insulators, in particular, these higher temperatures create a situation in which the electrons on the surface of the insulator invade the interior, or “bulk,” of the insulator, and cause the electrons there to also begin conducting, which dilutes or breaks the special quantum effect.

The way around this is to subject such experiments to exceptionally cold temperatures, typically at or near absolute zero. At these incredibly low temperatures, atomic and subatomic particles cease vibrating and are consequently easier to manipulate. However, creating and maintaining an ultra-cold environment is impractical for many applications; it is costly, bulky and consumes a considerable amount of energy.

But Hasan and his team have developed an innovative way to bypass this problem. Building on their experience with topological materials and working with many collaborators, they fabricated a new kind of topological insulator made from bismuth bromide (chemical formula α-Bi4Br4), which is an inorganic crystalline compound sometimes used for water treatment and chemical analyses.

“This is just terrific that we found them without giant pressure or an ultra-high magnetic field, thus making the materials more accessible for developing next-generation quantum technology,” said Nana Shumiya, a 2022 Ph.D. alum and a postdoctoral research associate in electrical and computer engineering, who is one of the three co-first authors of the paper.

“I believe our discovery will significantly advance the quantum frontier,” she said.

Experimental and theoretical discoveries have both continued. Daniel Tsui, the Arthur Legrand Doty Professor of Electrical Engineering, Emeritus, won the 1998 Nobel Prize in Physics for discovering the fractional quantum Hall effect, and F. Duncan Haldane, the Sherman Fairchild University Professor of Physics at Princeton, won the 2016 Nobel Prize in Physics for theoretical discoveries of topological phase transitions and a type of two-dimensional (2D) topological insulators. Subsequent theoretical developments showed that topological insulators can take the form of two copies of Haldane’s model based on electron’s spin-orbit interaction.

Hasan and his team have been on a decade-long search for a topological quantum state that can also operate at room temperature, following their discovery of the first examples of three-dimensional topological insulators in 2007. Recently, they found a materials solution to Haldane’s conjecture in a kagome lattice magnet that is capable of operating at room temperature, which also exhibits the desired quantization.

“The kagome lattice topological insulators can be designed to possess relativistic band crossings and strong electron-electron interactions. Both are essential for novel magnetism,” said Hasan. “Therefore, we realized that kagome magnets are a promising system in which to search for topological magnet phases, as they are like the topological insulators that we discovered and studied more than 10 years ago.

“A suitable atomic chemistry and structure design coupled to first-principles theory is the crucial step to make topological insulator’s speculative prediction realistic in a high-temperature setting,” said Hasan. “There are hundreds of topological materials, and we need both intuition, experience, materials-specific calculations and intense experimental efforts to eventually find the right material for in-depth exploration. And that took us on a decade-long journey of investigating many bismuth-based materials.”

Mind the (band) gap
Insulators, like semiconductors, have what are called insulating gaps, or band gaps. These are essentially barriers between orbiting electrons, a sort of no-man’s-land where electrons cannot go. These band gaps are extremely important because, among other things, they provide the lynchpin in overcoming the limitation of achieving a quantum state imposed by thermal noise. They do this if the width of the band gap exceeds the width of the thermal noise. But too large a band gap can potentially disrupt the spin-orbit coupling of the electrons — this is the interaction between the electron’s spin and its orbital motion around the nucleus. When this disruption occurs, the topological quantum state collapses. Therefore, the trick in inducing and maintaining a quantum effect is to find a balance between a large band gap and the spin-orbit coupling effects.

Following a proposal by collaborators and co-authors Fan Zhang and Yugui Yao to explore a type of Weyl metals, Hasan and team studied the bismuth bromide family of materials. But the team was not able to observe the Weyl phenomena in these materials. Hasan and his team instead discovered that the bismuth bromide insulator has properties that make it more ideal compared to a bismuth-antimony based topological insulator (Bi-Sb alloys) that they had studied before. It has a large insulating gap of over 200 meV (milli-electron volts). This is large enough to overcome thermal noise, but small enough that it does not disrupt the spin-orbit coupling effect and band inversion topology.

“In this case, in our experiments, we found a balance between spin-orbit coupling effects and large band gap width,” said Hasan. “We found there is a ‘sweet spot’ where you can have relatively large spin-orbit coupling to create a topological twist as well as raise the band gap without destroying it. It’s kind of like a balance point for the bismuth-based materials that we have been studying for a long time.”

The researchers knew they had achieved their goal when they viewed what was going on in the experiment through a sub-atomic resolution scanning tunneling microscope, a unique device that uses a property known as “quantum tunneling,” where electrons are funneled between the sharp metallic, single-atom tip of the microscope and the sample. The microscope uses this tunneling current rather than light to view the world of electrons on the atomic scale. The researchers observed a clear quantum spin Hall edge state, which is one of the important properties that uniquely exist in topological systems. This required additional novel instrumentation to uniquely isolate the topological effect.

“For the first time, we demonstrated that there’s a class of bismuth-based topological materials that the topology survives up to room temperature,” said Hasan. “We are very confident of our result.”

The researchers believe this breakthrough will open the door to a whole host of future research possibilities and applications in quantum technologies.

“We believe this finding may be the starting point of future development in nanotechnology,” said Shafayat Hossain, a postdoctoral research associate in Hasan’s lab and another co-first author of the study. “There have been so many proposed possibilities in topological technology that await, and finding appropriate materials coupled with novel instrumentation is one of the keys for this.”

Currently, the theoretical and experimental focus of the group is concentrated in two directions, said Hasan. First, the researchers want to determine what other topological materials might operate at room temperature, and, importantly, provide other scientists the tools and novel instrumentation methods to identify materials that will operate at room and high temperatures. Second, the researchers want to continue to probe deeper into the quantum world now that this finding has made it possible to conduct experiments at higher temperatures. These studies will require the development of another set of new instruments and techniques to fully harness the enormous potential of these materials. “I see a tremendous opportunity for further in-depth exploration of exotic and complex quantum phenomena with our new instrumentation, tracking more finer details in macroscopic quantum states,” Hasan said. “Who knows what we will discover?”

He added: “Our research is a real step forward in demonstrating the potential of topological materials for energy-saving applications. What we’ve done here, with this experiment, is plant a seed to encourage other scientists and engineers to dream big.”