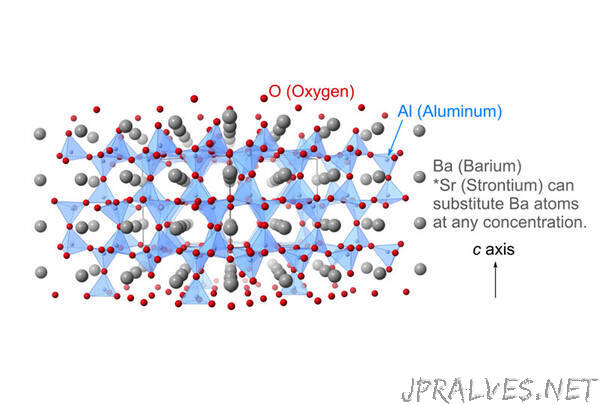 “If you have ever watched water freeze to ice, you have witnessed what physicists call a “phase transition.” Osaka Metropolitan University scientists have discovered an unprecedented phase transition during which crystals achieve amorphous characteristics while retaining their crystalline properties. Their findings contribute to developing hybrid materials for use in harsh environments, such as outer space. The results were published in Physical Review B.

In the dielectric compound Ba1-xSrxAl2O4, the structural phase transition is driven by an acoustic soft mode, the atomic vibration pattern of which is similar to that of sound waves. The compound comprises an AlO4 tetrahedral network and Ba/Sr atoms. The research team led by Associate Professor Yui Ishii from the Graduate School of Engineering at Osaka Metropolitan University has discovered that a highly disordered atomic arrangement is formed in the AlO4 network at chemical compositions near the structural quantum critical point, resulting in both characteristics of crystalline and amorphous materials.

Ba1-xSrxAl2O4 is a crystalline solid. However, the researchers found that at higher Sr concentrations than the structural quantum critical point, Ba1-xSrxAl2O4exhibits the thermal characteristic of amorphous materials, i.e., low thermal conductivity comparable to that of glass materials (e.g., silica glass). They observed that a part of the atomic structure loses periodicity because of the incoherently stopped acoustic soft mode. As a result, a combination of a glassy Al-O network and a periodic Ba arrangement is realized.

This hybrid state, which the research team was the first to discover, can be created simply by mixing raw materials uniformly and heating them.

Professor Ishii concluded, “In principle, the phenomenon revealed in this research can occur in materials exhibiting acoustic soft modes. Applying this technique to various materials will possibly help us create hybrid materials that combine the physical properties of crystals, such as optical properties and electrical conductivity, with the low thermal conductivity of amorphous materials. In addition, the high heat resistance of crystals can be utilized to develop insulation materials that can be used in harsh environments, such as outer space.”“