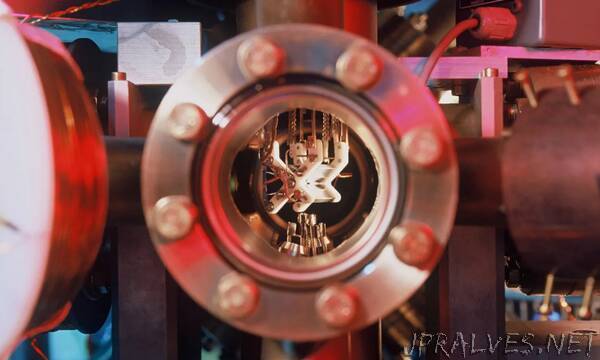 “Quantum devices are becoming ever more complex and powerful. Researchers at the University of Innsbruck, in collaboration with the Johannes Kepler University Linz and the University of Technology Sydney, are now presenting a method to characterize even large quantum computers using only a single measurement setting.

The gold-standard for the characterization of quantum devices is so-called quantum tomography, which in analogy to medical tomography, can draw a complete picture of a quantum system from a series of snapshots of the system. While offering plenty of insights, the number of measurements required for tomography increases rapidly, with three times as many measurements required for every additional qubit. Due to the sheer time it takes to perform all these measurements, tomography has only been possible on devices with a handful of qubits. However, recent developments on quantum computers have successfully scaled up system sizes much beyond the capabilities of tomography, making their characterization a daunting bottleneck.

Pictured from a single measurement setting
A team of physicists led by Martin Ringbauer from the Department of Experimental Physics at the University of Innsbruck, in collaboration with theoretical physicists from Linz and Sydney, have now developed and demonstrated a practical approach for characterizing even large-scale quantum systems, relying just on a single measurement setting, independent of the system size. This is achieved by moving partly away from the binary computation that is inherent to both quantum computers and to their classical predecessors. In fact, the atomic ions used for quantum information processing feature much more than just the two qubit levels to which it is artificially restricted. Engaging more levels holds the potential to store significantly more information per particle. “Extending qubits to four-level ququarts thus enables us to store and measure the entire information necessary for tomography in one go”, says Innsbruck physicist Roman Stricker. Combining this way of measuring with a data analysis approach named “classical shadows”, originally developed by Richard Küng from Johannes Kepler University Linz and colleagues, the team has demonstrated a highly efficient characterization approach. Using the combined techniques, they were, for the first time, able to completely characterize an eight-qubit system in real-time. Küng emphasizes, that their framework has the potential to enable real-time characterizations of large future devices, which is a significant next step towards scalability of quantum computers.

Widely applicable technique
The main technological challenge was to precisely transfer the qubit information into the four states of the ququart and then extract it in a single run of the experiment. “Our readout capabilities so far could only distinguish between two levels per detection, so we adapted our setup such that we can detect three times in a row to identify all four levels”, explains Michael Meth from the University of Innsbruck. “We managed to overcome this problem by programming a fast camera readout and counteract detection-induced heating of the ions by employing an extra laser cooling step”, explains Thomas Monz. These adaptions are crucial to prevent the loss of quantum information during the extended detection process. Martin Ringbauer, who led the Innsbruck team, emphasizes that “all the building blocks developed in this work are readily applicable to other quantum computer architectures that have access to higher-dimensional information carriers”.

The research work was published in the journal PRX Quantum and funded by the Austrian Science Fund FWF, through the SFB BeyondC, by the Austrian Research Promotion Agency FFG, and the European Union, among others.”