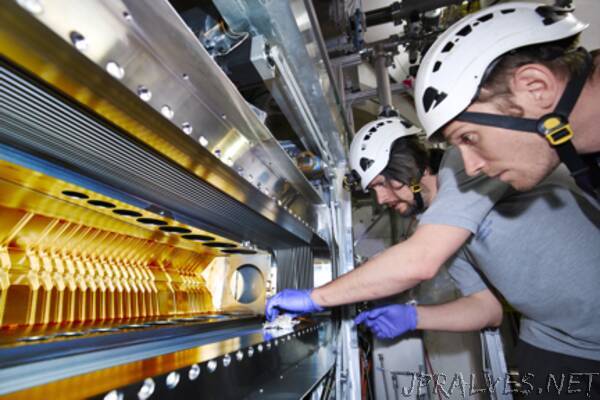 “The Large Hadron Collider (LHC) has successfully approached a proton collision point for the first time since its three-year refurbishment. The successful implementation of the new Vertex Locator (VELO), which was partly built in Manchester offers a greater collision rate of protons and efficiency.

The process is called “VELO closing” in the LHCb jargon. The LHC has recently started its third running period after a three-year long shutdown. In this period, one of the four major experiments, LHCb, has been upgraded with new detectors and a new readout system to be able to operate with a five times greater collision rate and with improved data selection efficiency. The experiment, which is lead by Professor Chris Parkes of The University of Manchester, has reached a major milestone today.

The LHC accelerates two beams of protons to nearly the speed of light and brings these beams, which travel around the 27 km circumference ring in opposite directions, to collide at four points. These four collision points are surrounded by detectors that probe the interactions of fundamental particles, which are produced in the proton-proton collisions. The heart of the LHCb detector is called the Vertex Locator and most of its detector modules were built at The University of Manchester.

The LHCb Vertex Locator modules can approach the LHC beams to as close as 5 mm, but they are retracted by about 3 cm to protect them during the period of beam injection and acceleration when the beams are less stable. Today, they have been brought to their fully closed position for the first time.

Professor Chris Parkes said: “The closing of the new LHCb Vertex Locator is a milestone for the upgraded experiment. Once closed, the LHC beams with an energy of the Eurostar train pass through an aperture the width of a pencil. The proximity of the sensors to the LHC beam will allow a precision imaging of the LHC collisions.”

The production of the Vertex Locator module was a major part of the £15m construction project in the UK, which was supported by the Science and Technology Facilities Council and which was led by Professor Parkes. Starting with first discussions in 2007, the R&D for the upgraded LHCb experiment ramped up a decade ago and moved to the construction phase in the last few years.

The production of the Vertex Locator module was a major part of the £15m construction project in the UK, which was supported by the Science and Technology Facilities Council and which was led by Professor Parkes. Starting with first discussions in 2007, the R&D for the upgraded LHCb experiment ramped up a decade ago and moved to the construction phase in the last few years.

The University of Manchester produced about 80% of the Vertex Locator modules in the cleanrooms of the Particle Physics Group in the Department of Physics and Astronomy. On the way to delivering these modules, the team of physicists, engineers, technicians and students overcame many challenges from adhesives not behaving as expected to the lab closure during the first COVID-19 lockdown.

Building every module started with taking delivery of the components and gluing the support legs to the half-millimetre thick silicon substrate, which acts as the main carrier plate for the remaining components and which provides cooling. This silicon plate contains microscopic channels etched into its inside through which liquid CO2 is pumped to absorb the heat produced by the sensors and readout electronics. The pre-fabricated silicon pixel sensors, which are connected to readout chips to form rectangular elements of 6 cm2 size, were glued with micrometer precision onto the substrate alongside the front-end readout circuitry. Electrical connections were established with hundreds of tiny wire bonds and after all power supply and data readout cables were attached, the modules’ functionality is fully tested in a vacuum, resembling their final operational conditions at the LHC.

These modules required highly customised assembly tools and procedures and a bespoke test stand. The project was underpinned by the collaboration of engineers and physicists who devised the materials and processes to satisfy the operational requirement of the detectors, which are now operated in a high vacuum and which record the position of charged particles that traverse with a precision of about ten micrometres. The amount of particle collisions also require all components to be able to tolerate the radiation dose they will be exposed to over its lifetime.

Professor Marco Gersabeck, who leads the LHCb team at The University of Manchester, said:

“This first full operation is the finishing touch to a decade-long R&D a constructing project in which our team of physicists, engineers, technicians and students combined their skills and expertise to design and build most of the high-precision detector modules that make up the VELO detector.”

At CERN, other team members are involved on the frontline of VELO operations. They calibrate the position of the individual sensors on all VELO modules to micrometer precision and monitor the quality of the acquired data live. Over the coming years, they will determine how radiation affects the detector performance. The detector is designed to operate for the coming ten years, during which time the LHCb dataset is expected to increase by about a factor of six. The LHCb experiment, which is dedicated to the precision study of particles containing quarks, has over the past decade made landmark discoveries including new sources of matter-antimatter asymmetries and new particle states such as Pentaquarks. Over the lifetime of the new VELO modules, they will facilitate measurements with an unprecedented precision by recording 30 million collisions a second.

The University of Manchester team is now shifting focus to preparations for the successor of the new detector. This project, which is supported by a £49.4m UKRI Infrastructure Fund, brings a new set of challenges and will deliver even greater precision to revolutionise LHCb’s discovery potential.”