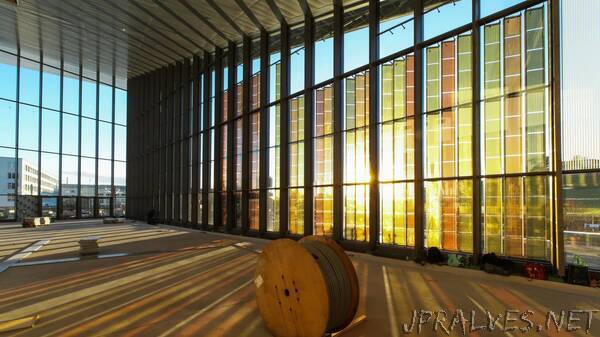 “Scientists at EPFL have increased the power conversion efficiency of dye-sensitized solar cells (“Grätzel cells”) beyond 15% in direct sunlight and 30% in ambient light conditions.

Mesoscopic dye-sensitized solar cells (DSCs) were invented in 1990s by Brian O’Regan and Michael Grätzel, taking on the latter’s name – the world-famous Grätzel cells. DSCs convert light into electricity through photosensitizers – dye compounds that absorb light and inject electrons into an array of oxide nanocrystals which subsequently are collected as electric current.

In DSCs, photosensitizers are attached (“adsorbed”) to the surface of nanocrystalline mesoporous titanium dioxide films that are imbibed with redox active electrolytes or a solid charge-transport material – the entire design aims to generate electric power by moving electrons from the photosensitizer towards an electrical output like a device or a storage unit.

DSCs are transparent, can be fabricated in multiple colors for low cost, and are already being used in skylights, greenhouses, as well as glass facades, such as those adorning the SwissTech Convention Center. In addition, lightweight flexible versions of DSCs are now commercially sold on a large scale for electrical powering of portable electronic devices such as earphones and e-readers, as well in the Internet of Things by using ambient light.

Recent advancements in photosensitizers and other components of DSCs have improved the performance of DSCs under both solar sunlight and ambient light conditions. But the key to enhance DSC efficiency, lies in understanding and controlling the assembly of dye molecules on the surface of titanium dioxide nanoparticle films that favor the generation of electrical charge.

One method is cosensitization, a chemical fabrication approach that produces DSCs with two or more different dyes that have complementary optical absorption. Cosensitization has moved the power-conversion efficiencies of DSCs towards world-record values because it can conceivably combine dyes that can absorb light from across the entire light spectrum. Nonetheless, cosensitization has also proved ineffective in some cases since finding the right pairs of dyes that can achieve high light absorption and power conversion efficiency requires painstaking molecular design, synthesis, and screening.

Now, scientists from the groups of Grätzel and Anders Hagfeldt at EPFL have developed a way of improving the packing of two newly designed photosensitizer dye molecules to enhance the DSC’s photovoltaic performance. Together, the new photosensitizers can harvest light quantitatively across the entire visible domain. The new technique involves pre-adsorbing a monolayer of a derivative of hydroxamic acid on the surface of nanocrystalline mesoporous titanium dioxide. This slows down the adsorption of the two sensitizers, enabling the formation of a well ordered and densely packed layer of sensitizer at the titanium dioxidesurface.

With this approach, the team was able to develop DSCs with a power conversion efficiency of 15.2% for the first time under standard global simulated sunlight, with long-term operational stability tested over 500 hours. By increasing the active area to 2.8 cm2, the power conversion efficiency spanned 28.4% – 30.2% over a wide range of ambient light intensities along with outstanding stability.

The authors write: “Our findings pave the way for facile access to high performance DSCs and offer promising prospects for applications as power supply and battery replacement for low-power electronic devices that use ambient light as their energy source.”