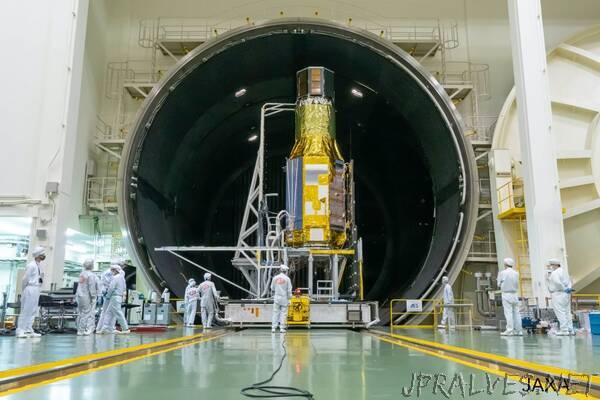 ““As something falls from a high position to a low position, it gains kinetic energy by losing gravitational potential.”

It is a sentence that could belong in any physics textbook. But Associate Professor Yamaguchi Hiroya is not discussing the quintessential student problem of dropping an object into a well. Instead, he is describing the formation of the largest structures in the Universe: galaxy clusters. The activity within these cosmological monoliths have long remained unclear, but this is set to change with the launch of the XRISM X-ray Space Observatory next fiscal year.

Shortly after the birth of the Universe, all matter was spread nearly homogeneously throughout space. But tiny variations in the distribution created pockets of slightly higher mass, and these exerted a gravitational tug on their surroundings that drew in more matter. Over cosmological time, the dense pockets grew to become vast regions of dark matter and gas that coalesced into clusters of galaxies.

Being drawn into one of these cluster regions is similar to being dropped down a well. With a higher mass than the gas, the dark matter creates most of the gravitational force which drags the gas into the cluster region. The potential energy of the in-flowing gas is converted into kinetic energy.

“This kinetic energy will eventually be transformed into thermal motion, which means that the temperature will become high,” explains Yamaguchi. “So when gas falls into this gravitational well, it gets thermal energy and a temperature. These are the main properties XRISM will observe: the accumulation of primordial gas onto the dark matter.”

The temperature of the in-falling gas is so high that the radiation it emits is not the infrared of a gas stove, but the much higher energy X-ray. The X-ray photons can carry away large amounts of energy from the hot gas in the cluster core, which causes it to cool. Yet despite this mechanism continuing for billions of years, cluster gas remains exceedingly hot.

“This is puzzling,” notes Yamaguchi. “Currently, we have virtually no idea of what is really going on at the centre of clusters.”

The cause of the continual heat may be energy sources from the galaxies within the cluster, including the rapidly rotating gas that circle super massive black holes (active galactic nuclei) and the energy released in explosions known as supernovae. However, whether this is correct, which of these sources dominates, and exactly how that energy is transferred, remains unclear because the speed and direction of the gas motion has not been accurately measured.

”The galaxy M87 sits in the centre of the Virgo cluster and hosts the super massive black hole that was imaged by the Event Horizon Telescope,” Yamaguchi offers as an example. “We can see a jet-like feature from this area but we’ve never been able to confirm this is indeed related to the black hole activity, because the velocity has never been measured. But with XRISM, we can measure the velocity which would tell us its origin, and the amount of energy coming from this into the cluster.”

Confirming the motion of the cluster gas would help identify the sources of energy that galaxies generate, and also constrain the total amount of energy within the cluster. The first of these will also help understand the motion of gas within the galaxies themselves, which affects how quickly gas can collapse to form stars. However, most of the energy in the cluster comes from the tumble of gas into the cluster’s gravitational well. A measure of the cluster’s totally energy budget therefore indicates how much gas fell into the cluster, allowing a better understanding of how the cosmic structure we see today formed and evolved.

One of the reasons why we have not been able to investigate the energy drivers of galaxy clusters before XRISM is actually to do with their humungous size. Containing hundreds to thousands of galaxies spread across 10s of millions of light years, clusters are diffuse sources of X-ray radiation. While our previous telescopes have been able to study the X-rays from compact sources such as the vicinity of black holes, this spread out radiation requires a different instrument design.

The X-Ray Imaging and Spectroscopy Mission (XRISM) will carry two telescopes, one dedicated to imaging (named “Xtend”) and the other high-resolution spectroscopy (named “Resolve”). Spectroscopy is a technique that measures the intensity of the X-ray radiation at different wavelengths. It is this that can tell us about motion.

As gas moves through the cluster and towards or away from our view at Earth, the wavelength of the emitted radiation shifts to shorter or longer wavelengths in the same way that an ambulance siren changes pitch as it moves towards and away from your location. This Doppler shift therefore reveals the movement of the gas, and that can indicate its source.

The Resolve telescope onboard XRISM will be able to measure the intensity of the X-ray emission at different wavelengths between 41 – 1 Å, where 1 Å is 0.0000000001 m (measured in energy, this range is 0.3 – 12 keV). To achieve high sensitivity, Resolve will be cooled with liquid helium and mechanical coolers down to 0.05 degrees above absolute zero. In case of problems such as leakage with the liquid helium, another mechanical cooler is also available. The use of the mechanical cooler takes time that the team would rather spend on observations, making this second-choice to the incredibly cold helium, but a solid back-up in case of problems.

The capabilities of these telescopes have only previously flown on the sadly-fated ASTRO-H (Hitomi) X-ray telescope in 2016, which was lost one month after launch after entering an uncontrollable spin. With XRISM, we finally get an opportunity to see the Universe through this remarkable new set of eyes.

“There’s never been an instrument before that could see what XRISM will observe,” notes Yamaguchi.

XRISM’s capabilities will not only be applied to galaxy clusters. Another target lies in our own Milky Way galaxy, where XRISM’s dual sight will be turned on the remains of the giant stars. During their lifetime, stars fuse lighter elements such as hydrogen to create the heavier elements such as helium. But even heavier elements such as iron in our Universe can only be fused in the depths of massive stars during the last period of their life or the supernova explosion that occurs at their death. The elements ejected from these supernovae enrich the Universe with the elements that we see today, making the diversity of minerals and even life on our planet possible. By examining the individual remnants of supernovae, through to the elements present in galaxies and clusters, XRISM can follow the production of these heavy elements and how they spread to become available across the Universe.

“XRISM will see all three scales,” Yamaguchi explains. “The individual supernovae remnants in our Galaxy, through to galaxies as a whole and then to the cluster. This will tell us the abundance of heavy elements that are made in each supernova event, and the transport mechanism that leads to enrichment of the Universe.”

One team that will be paying particular attention to the performance of XRISM is that of the ATHENA mission: an ESA-led X-ray observatory scheduled for launch in the mid-2030s. While further in the future, the knowledge obtained from XRISM will be invaluable to the scientific studies performed for ATHENA.

“I think XRISM will find a lot of open issues,” says Yamaguchi. “That will be the homework for ATHENA!”

XRISM is a joint project with NASA, with international collaboration from ESA and universities and research institutes from across Japan and abroad. The telescope is scheduled to launch next fiscal year (2023 – 2024) on JAXA’s HII-A rocket from Tanegashima Space Center. With its launch, we will get an entirely new type of gaze on the Universe.”