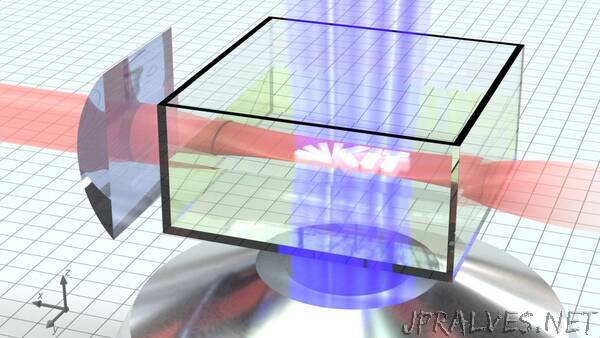 “Printing objects from plastic precisely, quickly, and inexpensively is the goal of many 3D printing processes. However, speed and high resolution remain a technological challenge. A research team from the Karlsruhe Institute of Technology (KIT), Heidelberg University, and the Queensland University of Technology (QUT) has come a long way toward achieving this goal. It developed a laser printing process that can print micrometer-sized parts in the blink of an eye. The international team published the work in Nature Photonics. (DOI: 10.1038/s41566-022-01081-0)

Stereolithography 3D printing is currently one of the most popular additive manufacturing processes for plastics, both for private and industrial applications. In stereolithography, the layers of a 3D object are projected one by one into a container filled with resin. The resin is cured by UV light. However, previous stereolithography methods are slow and have too low a resolution. Light-sheet 3D printing, which is used by the KIT researchers, is a fast and high-resolution alternative.

In light-sheet 3D printing, blue light is projected into a container filled with a liquid resin. The blue light pre-activates the resin. In a second stage, a red laser beam provides the additional energy needed to cure the resin. However, 3D printing can only print quickly resins that quickly return from their pre-activated state to their original state. Only then can the next layer be printed. Consequently, the return time dictates the waiting time between two successive layers and thus the printing speed. “For the resin we used, the return time was less than 100 microseconds, which allows for high printing speeds,” says first author Vincent Hahn from KIT’s Institute of Applied Physics (APH).

Micrometer-sized Structures in Just the Blink of an Eye

To take advantage of this new resin, the researchers built a special 3D printer. In this printer, blue laser diodes are used to project images into the liquid resin using a high-resolution display with a high frame rate. The red laser is formed into a thin “light sheet” beam and crosses the blue beam vertically in the resin. With this arrangement, the team was able to 3D print micrometer-sized parts in a few hundred milliseconds, i.e. in the blink of an eye. However, it should not stop there: “With more sensitive resins, we could even use LEDs instead of lasers in our 3D printer,” says Professor Martin Wegener of APH. “Ultimately, we want to print 3D structures that are centimeters in size, while maintaining micrometer resolution and high printing speeds.”

Cluster of Excellence “3D Matter Made to Order”

In the Cluster of Excellence “3D Matter Made to Order,” scientists from the Karlsruhe Institute of Technology (KIT) and Heidelberg University are conducting interdisciplinary research on innovative technologies and materials for digitally scalable additive manufacturing to improve the precision, speed, and performance of 3D printing. The goal of the work is to fully digitize 3D manufacturing and materials processing from the molecule to the microstructure. In addition to being funded as a Cluster of Excellence under the Excellence Strategy Competition of the German federal and state governments, “3D Matter Made to Order” is funded by the Carl Zeiss Foundation.”