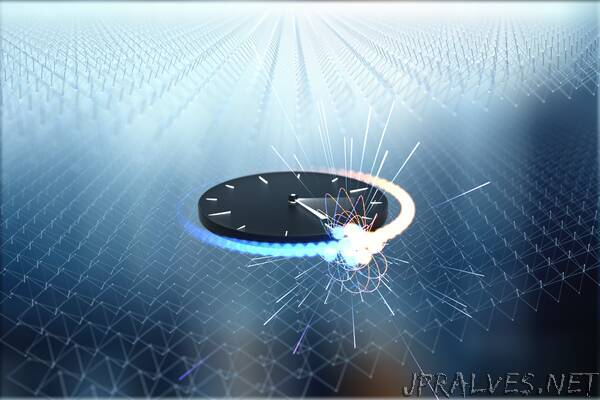 The key to maximizing traditional or quantum computing speeds lies in our ability to understand how electrons behave in solids, and a collaboration between the University of Michigan and the University of Regensburg captured electron movement in attoseconds—the fastest speed yet.

Seeing electrons move in increments of one quintillionth of a second could help push processing speeds up to a billion times faster than what is currently possible. In addition, the research offers a “game-changing” tool for the study of many-body physics.

“Your current computer’s processor operates in gigahertz, that’s one billionth of a second per operation,” said Mackillo Kira, U-M professor of electrical engineering and computer science, who led the theoretical aspects of the study published in Nature. “In quantum computing, that’s extremely slow because electrons within a computer chip collide trillions of times a second and each collision terminates the quantum computing cycle.

“What we’ve needed, in order to push performance forward, are snapshots of that electron movement that are a billion times faster. And now we have it.”

Rupert Huber, professor of physics at the University of Regensburg and corresponding author of the study, said the result’s potential impact in the field of many-body physics could surpass its computing impact.

“Many-body interactions are the microscopic driving forces behind the most coveted properties of solids—ranging from optical and electronic feats to intriguing phase transitions—but they have been notoriously difficult to access,” said Huber, who led the experiment. “Our solid-state attoclock could become a real game changer, allowing us to design novel quantum materials with more precisely tailored properties and help develop new materials platforms for future quantum information technology.”

To see electron movement within two-dimensional quantum materials, researchers typically use short bursts of focused extreme ultraviolet (XUV) light. Those bursts can reveal the activity of electrons attached to an atom’s nucleus. But the large amounts of energy carried in those bursts prevent clear observation of the electrons that travel through semiconductors—as in current computers and in materials under exploration for quantum computers.

U-M engineers and partners employ two light pulses with energy scales that match that of those movable semiconductor electrons. The first, a pulse of infrared light, puts the electrons into a state that allows them to travel through the material. The second, a lower-energy terahertz pulse, then forces those electrons into controlled head-on collision trajectories. The crashes produce bursts of light, the precise timing of which reveals interactions behind quantum information and exotic quantum materials alike.

“We used two pulses—one that is energetically matched with the state of the electron, and then a second pulse that causes the state to change,” Kira said. “We can essentially film how these two pulses change the electron’s quantum state and then express that as a function of time.”

The two-pulse sequence allows time measurement with a precision better than one percent of the oscillation period of the terahertz radiation that accelerates the electrons.

“This is really unique and took us many years of development,” Huber said. “It is quite unexpected that such high-precision measurements are even possible if you remember how ridiculously short a single oscillation cycle of light is—and our time resolution is one hundred times faster yet.”

Quantum materials could possess robust magnetic, superconductive or superfluid phases, and quantum computing represents the potential for solving problems that would take too long on classical computers. Pushing such quantum capabilities will eventually create solutions to problems that are currently out of our reach. That starts with basic observational science.

“No one has been able to build a scalable and fault-tolerant quantum computer so far and we don’t even know what that would look like,” said study co-first author Markus Borsch, U-M doctoral student in electrical and computer engineering. “But basic research like studying how electronic motion in solids works on the most fundamental levels might give us an idea that leads us in the right direction.”

Josef Freudenstein, a doctoral student at the University of Regensburg, is also co-first-author. The study was supported by the German Research Foundation, Army Research Office, the W.M. Keck Foundation and Michigan Engineering’s Blue Sky Research Program.”