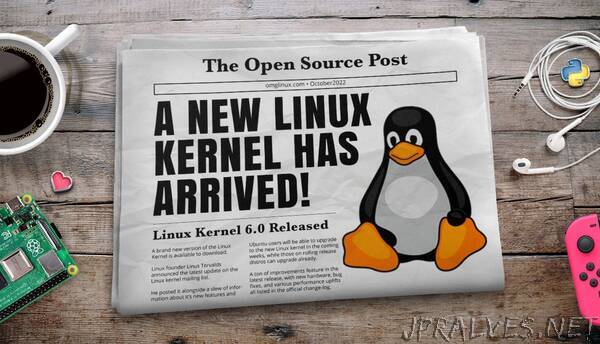 “Linux 6.0 kickstarts the 6.x series in fine form, bringing an assortment of performance improvements, new hardware support, security fixes, and the usual grab-bag of file-system tweaks to the fore.

Announcing the release over on the Linux Kernel Mailing List, Linus Torvalds said: “As is hopefully clear to everybody, the major version number change is more about me running out of fingers and toes than it is about any big fundamental changes.”

“But of course there’s a lot of various changes in 6.0 – we’ve got over 15k non-merge commits in there in total, after all, and as such 6.0 is one of the bigger releases at least in numbers of commits in a while.

For a pinch more detail on what’s new in Linux kernel 6.0, read on.

Both the OpenRISC and LoongArch architectures gain support for PCI buses, while RISC-V buffs up its cache block management capabilities using a number of new extensions, including the “Zicbom” extension. RISC-V also ships with a new default configuration capable of running Docker from the get-go.

The (expensive) Lenovo ThinkPad X13s laptop, which runs on the Qualcomm Snapdragon 8cx Gen3, starts to pick up support. The ThinkPad X13s is pre-loaded with Windows 11 for ARM but, with Linux support now in the formative stages, this could be a great reference device for Linux ARM enthusiasts.

Talking of laptops Linux enthusiasts use, some TUXEDO Computers and Clevo laptops had issues with touchpads and keyboard when resuming from suspend in earlier kernel versions. Those are now fixed in Linux 6.0.

Ubuntu’s default file system remains ext4, so I wanted to mention that Linux 6.0 enables two new ioctl() operations: EXT4_IOC_GETFSUUID and EXT4_IC_SETFSUUID. These make it possible to get or set the UUID stored in a filesystem superblock.

Other assorted changes in Linux 6.0 include:

Plus, as you can imagine, a whole lot more. I recommend checking out Phoronix’s feature overview for top-level info, or diving in to the comprehensive LWN merge report 1 and LWN merge report 2 for more detail.

Get Linux 6.0
Linux 6.0 is available to download as source code right now, which you can compile by hand on your distro of choice? Not up for that? Wait for your distro maintainer to package the do the half graft instead. Some distros (like Arch) issue new kernel updates relatively quickly, but others (like Ubuntu) don’t.

You can take a punt on Canonical’s mainline repo to install Linux 6.0 on Ubuntu based distros (though keep in mind these do not come with any warranty or guarantee of support).”