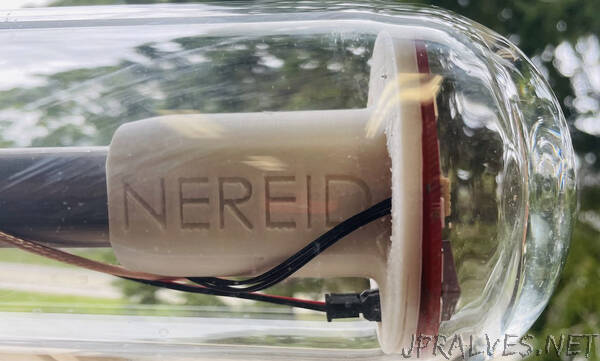 “A team of scientists, including Rochester biologist Anne S. Meyer, is developing bioplastics to degrade in oceans.
Plastic waste poses an urgent problem for our planet’s ecosystems, especially our waterways. Millions of tons of plastic waste enter Earth’s oceans every year, and plastic has been found in every part of the ocean, including at the bottom of the deepest ocean trenches.

Although some biodegradable plastics, or bioplastics, have recently been developed, these plastics were intended to break down in industrial compost facilities. In cold, dark ocean environments, they break down very slowly.

What if there were a way to avoid the problem of plastic pollution while still reaping the benefits of plastic’s durability, versatility, and low cost?

In order to tackle this problem, Anne S. Meyer, an associate professor in the Department of Biology at the University of Rochester, worked with marine microbiologist Alyson Santoro at the University of California, Santa Barbara; University of Rhode Island oceanographer Melissa Omand; ecologist Ryan Freedman from the Channel Islands National Marine Sanctuary; and industry partner Mango Materials. Together, the team is developing bioplastics—environmentally friendly plastic materials engineered to degrade in ocean environments.

Supported by the National Science Foundation’s Convergence Accelerator program, the group, collectively known as Nereid Biomaterials, is now poised to enter Phase 2 of their project, in which they will test their biodegradable bioplastic. The team recently learned they are the recipients of a $5 million NSF Phase 2 grant, of which $1 million was awarded to Meyer and her lab.

“Our new NSF-funded project will create bioplastics that can be degraded in ocean environments for the first time,” Meyer says.

Biodegradable ocean instruments
Ocean-degradable plastics will be vital for oceanographers, who are increasingly reliant on expendable, plastic instruments to observe and predict ocean phenomena. These instruments are often deployed in the ocean and never retrieved, adding to the growing amount of plastic in the sea.

“While these expendable ocean sensors are revolutionizing ocean research, they inherently pose a threat to the same environments that they are studying,” Meyer says. “We need new materials that can allow oceanographers to monitor the oceans without creating plastic ocean waste that gets left behind.”

The team has so far partnered with five oceanographic equipment manufacturers who have committed to replace all, or a large portion of, their traditional petro-chemical plastic parts with the team’s ocean-degradable materials.

“This will introduce new sustainability into the fields of ocean observation, reef restoration, and maritime defense,” Meyer says.

Ocean-degradable bioplastics mimic nature
To create their ocean-degradable plastic, the team drew upon processes already found in nature. Their materials are based on a biopolymer called polyhydroxybutyrate (PHB)—a polyester naturally made by bacteria. Because bacteria have been making this polymer for billions of years, other marine microbes have naturally evolved to break down PHB.

At UC Santa Barbara, Santoro and her lab partners culture new bacteria that can break down PHB. One focus of their work is to isolate bacteria that thrive in the cold conditions of the ocean. They “feed” these microbes with methane emitted by wastewater treatment plants, “which is another win,” Santoro says.

“We found that there’s a huge need for biodegradable materials and there is a range of lifespans that users required for their items,” she adds. The team spoke with regulators and nonprofits that deal with marine debris and found that some groups wanted a material that could disappear in a day, others wanted devices that would last a year, and yet others wanted to be able to trigger the degradation.

This is where Meyer’s lab comes in. Meyer and the members of her lab have developed first-of-their-kind bacterial 3D printers. This revolutionary 3D-bioprinting approach enables them to create engineered living bacterial cells that incorporate the PHB-degrading bacteria. The researchers’ 3D-printed living materials degrade their surrounding bioplastic structures. Strategically placing these bacteria in or on the plastic provides users with options for when and how quickly the biopolymer degrades.

Phase 2: Industry partners test bioplastic prototype
Developing this strategy was part of Phase 1 of the project, in which the team also gathered input and built a prototype, created with the oceanographic sensor design expertise of Omand at the University of Rhode Island.

Phase 2 involves deploying the bioplastic in the real world. In collaboration with more than a dozen industry partners who have committed to using this new technology, the team will see how well their bioplastic performs under different ocean conditions as well as how the material breaks down.

The team will also participate in the NSF Convergence Accelerator’s innovation and entrepreneurial curriculum, which includes training on product development, intellectual property, financial resources, sustainability planning, and communications and outreach.

If all goes well with Phase 2, the ocean bioplastic may have myriad applications and revolutionize oceangoing plastics.

“After introducing our ocean-degradable bioplastic to ocean instruments, we plan to expand to other applications as well,” Meyer says. “Our tough plastics that break down in the ocean could be a great fit for aquaculture and fishing industries, ecosystem restoration efforts, maritime defense, or government agencies, such as the NOAA (National Oceanic and Atmospheric Administration) National Data Buoy Center.””