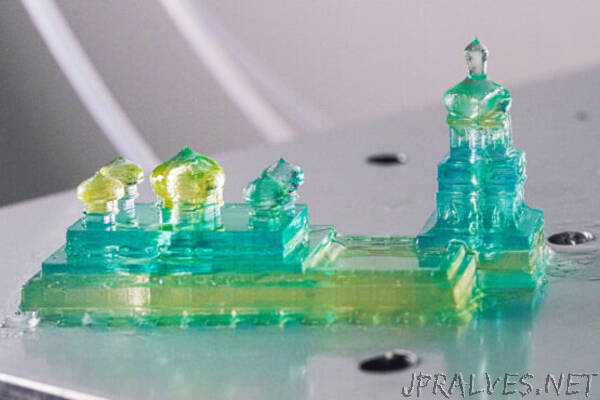 “Stanford engineers have designed a method of 3D printing that is 5 to 10 times faster than the quickest high-resolution printer currently available and is capable of using multiple types of resin in a single object.

Advancements in 3D printing have made it easier for designers and engineers to customize projects, create physical prototypes at different scales, and produce structures that can’t be made with more traditional manufacturing techniques. But the technology still faces limitations – the process is slow and requires specific materials which, for the most part, must be used one at a time.

Researchers at Stanford have developed a method of 3D printing that promises to create prints faster, using multiple types of resin in a single object. Their design, published recently in Science Advances, is 5 to 10 times faster than the quickest high-resolution printing method currently available and could potentially allow researchers to use thicker resins with better mechanical and electrical properties.

“This new technology will help to fully realize the potential of 3D printing,” says Joseph DeSimone, the Sanjiv Sam Gambhir Professor in Translational Medicine and professor of radiology and of chemical engineering at Stanford and corresponding author on the paper. “It will allow us to print much faster, helping to usher in a new era of digital manufacturing, as well as to enable the fabrication of complex, multi-material objects in a single step.”

Controlling the flow of resin
The new design improves on a method of 3D printing created by DeSimone and his colleagues in 2015 called continuous liquid interface production, or CLIP. CLIP printing looks like it belongs in a science fiction movie – a rising platform smoothly pulls the object, seemingly fully formed, from a thin pool of resin. The resin at the surface is hardened into the right shape by a sequence of UV images projected through the pool, while a layer of oxygen prevents curing at the bottom of the pool and creates a “dead zone” where the resin remains in liquid form.

The dead zone is the key to CLIP’s speed. As the solid piece rises, the liquid resin is supposed to fill in behind it, allowing for smooth, continuous printing. But this doesn’t always happen, especially if the piece rises too quickly or the resin is particularly viscous. With this new method, called injection CLIP, or iCLIP, the researchers have mounted syringe pumps on top of the rising platform to add additional resin at key points.

“The resin flow in CLIP is a very passive process – you’re just pulling the object up and hoping that suction can bring material to the area where it’s needed,” says Gabriel Lipkowitz, a PhD student in mechanical engineering at Stanford and lead author on the paper. “With this new technology, we actively inject resin onto the areas of the printer where it’s needed.”

The resin is delivered through conduits that are printed simultaneously with the design. The conduits can be removed after the object is completed or they can be incorporated into the design the same way that veins and arteries are built into our own body.

Multi-material printing
By injecting additional resin separately, iCLIP presents the opportunity to print with multiple types of resin over the course of the printing process – each new resin simply requires its own syringe. The researchers tested the printer with as many as three different syringes, each filled with resin dyed a different color. They successfully printed models of famous buildings from several countries in the color of each country’s flag, including Saint Sophia Cathedral in the blue and yellow of the Ukrainian flag and Independence Hall in American red, white, and blue.

“The ability to make objects with variegated material or mechanical properties is a holy grail of 3D printing,” Lipkowitz says. “The applications range from very efficient energy-absorbing structures to objects with different optical properties and advanced sensors.”

Having successfully demonstrated that iCLIP has the potential to print with multiple resins, DeSimone, Lipkowitz, and their colleagues are working on software to optimize the design of the fluid distribution network for each printed piece. They want to ensure that designers have fine control over the boundaries between resin types and potentially speed up the printing process even further.

“A designer shouldn’t have to understand fluid dynamics to print an object extremely quickly,” Lipkowitz says. “We’re trying to create efficient software that can take a part that a designer wants to print and automatically generate not only the distribution network, but also determine the flow rates to administer different resins to achieve a multi-material goal.””