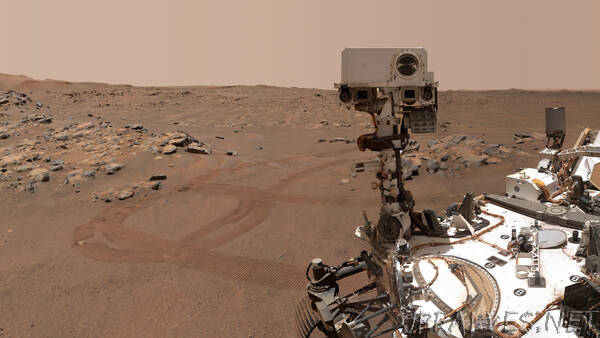 “The rover found that Jezero Crater’s floor is made up of volcanic rocks that have interacted with water.

Scientists got a surprise when NASA’s Perseverance Mars rover began examining rocks on the floor of Jezero Crater in spring of 2021: Because the crater held a lake billions of years ago, they had expected to find sedimentary rock, which would have formed when sand and mud settled in a once-watery environment. Instead, they discovered the floor was made of two types of igneous rock – one that formed deep underground from magma, the other from volcanic activity at the surface.

The findings are described in four new papers published Thursday, Aug. 25. In Science, one offers an overview of Perseverance’s exploration of the crater floor before it arrived at Jezero’s ancient river delta in April 2022; a second study in the same journal details distinctive rocks that appear to have formed from a thick body of magma. The other two papers, published in Science Advances, detail the unique ways that Perseverance’s rock-vaporizing laser and ground-penetrating radar established that igneous rocks cover the crater floor.

Igneous rocks are excellent timekeepers: Crystals within them record details about the precise moment they formed.

“One great value of the igneous rocks we collected is that they will tell us about when the lake was present in Jezero. We know it was there more recently than the igneous crater floor rocks formed,” said Ken Farley of Caltech, Perseverance’s project scientist and the lead author of the first of the new Science papers. “This will address some major questions: When was Mars’ climate conducive to lakes and rivers on the planet’s surface, and when did it change to the very cold and dry conditions we see today?”

However, because of how it forms, igneous rock isn’t ideal for preserving the potential signs of ancient microscopic life Perseverance is searching for. In contrast, determining the age of sedimentary rock can be challenging, particularly when it contains rock fragments that formed at different times before the rock sediment was deposited. But sedimentary rock often forms in watery environments suitable for life and is better at preserving ancient signs of life.

That’s why the sediment-rich river delta Perseverance has been exploring since April 2022 has been so tantalizing to scientists. The rover has begun drilling and collecting core samples of sedimentary rocks there so that the Mars Sample Return campaign could potentially return them to Earth to be studied by powerful lab equipment too large to bring to Mars.

A second paper published in Science solves a longstanding mystery on Mars. Years ago, Mars orbiters spotted a rock formation filled with the mineral olivine. Measuring roughly 27,000 square miles (70,000 square kilometers) – nearly the size of South Carolina – this formation extends from the inside edge of Jezero Crater into the surrounding region.

Scientists have offered various theories why olivine is so plentiful over such a large area of the surface, including meteorite impacts, volcanic eruptions, and sedimentary processes. Another theory is that the olivine formed deep underground from slowly cooling magma – molten rock – before being exposed over time by erosion.

Yang Liu of NASA’s Jet Propulsion Laboratory in Southern California and her co-authors have determined that last explanation is the most likely. Perseverance abraded a rock to reveal its composition; studying the exposed patch, the scientists homed in on the olivine’s large grain size, along with the rock’s chemistry and texture.

Using Perseverance’s Planetary Instrument for X-ray Lithochemistry, or PIXL, they determined the olivine grains in the area measure 1 to 3 millimeters – much larger than would be expected for olivine that formed in rapidly cooling lava at the planet’s surface.

“This large crystal size and its uniform composition in a specific rock texture require a very slow-cooling environment,” Liu said. “So, most likely, this magma in Jezero wasn’t erupting on the surface.”

SuperCam is equipped with rock-vaporizing laser that can zap a target as small as a pencil tip from up to 20 feet (7 meters) away. It studies the resulting vapor using a visible-light spectrometer to determine a rock’s chemical composition. SuperCam zapped 1,450 points during Perseverance’s first 10 months on Mars, helping scientists arrive at their conclusion about igneous rocks on the crater floor.

In addition, SuperCam used near-infrared light – it’s the first instrument on Mars with that capability – to find that water altered minerals in the crater floor rocks. However, the alterations weren’t pervasive throughout the crater floor, according to the combination of laser and infrared observations.

“SuperCam’s data suggests that either these rock layers were isolated from Jezero’s lake water or that the lake existed for a limited duration,” said Roger Wiens, SuperCam’s principal investigator at Purdue University and Los Alamos National Laboratory.

RIMFAX marks another first: Mars orbiters carry ground-penetrating radars, but no spacecraft on the surface of Mars have before Perseverance. Being on the surface, RIMFAX can provide unparalleled detail, and surveyed the crater floor as deep as 50 feet (15 meters).

Its high-resolution “radargrams” show rock layers unexpectedly inclined up to 15 degrees underground. Understanding how these rock layers are ordered can help scientists build a timeline of Jezero Crater’s formation.

“As the first such instrument to operate on the surface of Mars, RIMFAX has demonstrated the potential value of a ground-penetrating radar as a tool for subsurface exploration,” said Svein-Erik Hamran, RIMFAX’s principal investigator at the University of Oslo in Norway.

The science team is excited by what they’ve found so far, but they’re even more excited about the science that lies ahead.”