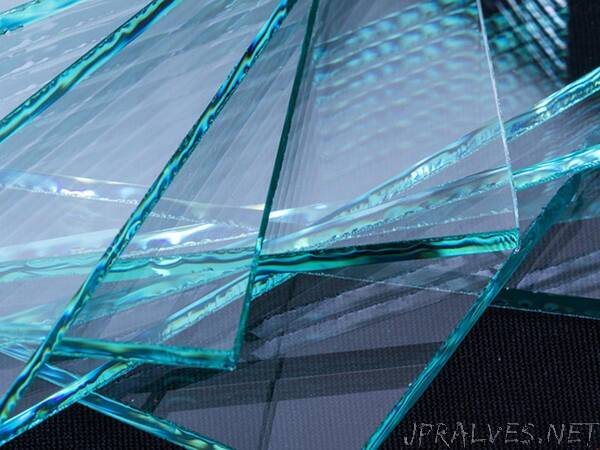 “Although glass has been used throughout history, its atomic structure was not proposed until the 20th century. Yet, a few mysteries remain even today.

In a seminal paper in The Journal of the American Chemical Society in 1932, physicist William H. Zachariasen first proposed that glass is composed of three-dimensional, random networks of alternate atoms of silicon and oxygen joined in long cross-linked chains.

He suggested that the basic structural unit was a tetrahedron of one silicon atom surrounded by four oxygen atoms in which the tetrahedrons shared corners.

He theorised that the network lacked the rotational symmetry and translational periodicity found in a crystal structure. But how did Zachariasen or his peers know that his radical idea was basically correct?

The first major body of evidence to support Zachariasen’s hypothesis came from the application of X-ray diffraction studies. When X-ray light is shone on a substance, bright patterns appear as spots on a photographic plate.

Although this Nobel prize-winning technique developed by William and Lawrence Bragg worked brilliantly to explain the X-ray patterns from crystals, the situation for glasses remained a mystery.

Glass produced a series of dim, broad rings, very similar to those found in liquids.

At first, it was theorised that the glasses were comprised of many small, randomly orientated crystals.

However, the correct interpretation came in 1934, when the physicist B E Warren showed mathematically that a random network, such as described by Zachariasen, could precisely explain the intensity and the position of the weak broad rings observed in X-ray diffraction.

Today, the study of glasses using X-ray and neutron diffraction has matured into a vast and active field, and these nuclear techniques are routinely used to extract the so-called “pair distribution function” of disordered materials, a measure of the distribution of gaps and spacing between atoms.

In fact, it is now known that what we commonly refer to as glass, silicon dioxide (SiO2), is only one example of a very common type of “glassy” structure, generally known as amorphous materials. And it has a large family of relatives in “metallic glasses”, “polymer glasses”, “oxide glasses”, etc.

Even today, the many fascinating structural, optical, electronic and quantum properties of the glass family continue to fascinate researchers.

Although X-ray and neutron diffraction provide a very useful measure of the glass structure, these scattering techniques are most sensitive to the distribution of spacings between atoms averaged over the entire sample (approximately 1028 atoms).

The measurements are indirect in that they do not provide a direct image of any single atom. However, in the past decade, new techniques such as scanning tunnelling microscopy and atomic probe tomography have allowed researchers to directly “photograph” the structure of glasses at the single atom level.

Researchers from the Fritz Haber Institute in Germany clarified the atomic structure in a two-dimensional model of amorphous silica using scanning tunnelling and atomic force microscopy in a paper published in Physical Review Letters in 2012.

Preliminary scans revealed irregular meshes in a network as proposed by Zachariasen.

They also saw the transition from a crystal structure to an amorphous state, as shown by their experimental data in the figure below.

According to their observations, silicon and oxygen atoms take turns in the individual silica layers and form a network of rings that lie next to each other.

They found that the rings assume sizes that differ greatly from rectangular rings with only four atoms through to those with nine or more atoms.

Most of the rings were hexagonal. There were fewer rings if the number of their atoms deviated from six.

So, other than windows, what is glass useful for?
It is the mechanical, electrical, chemical, optical and thermal properties of glass, as determined by its chemical composition and atomic structure, that make it a highly useful material with a myriad of applications. Certain types of glasses are even used in electronics and superconducting quantum computing.

“The structure of glassy, amorphous solids makes them challenging to understand on the theoretical level; however, they often produce excellent physical properties. My research has been looking at novel magnetic and electronic properties in amorphous materials,” said Dr Julie Karel, a researcher at Monash and with the ARC Centre of Excellence in Future Low Energy Electronics, who uses X-ray, neutron and ion beam techniques to study the electronic properties of glasses.

“One of the great features of glasses is that being intrinsically disordered, they are often highly resistant against additional external disorder. For example, we’ve been doing experiments at the Centre for Accelerator Science and the Australian Centre of Neutron Scattering looking at ion beam irradiation effects in glasses and find that they are often more resilient their than crystalline equivalents,” she added.

On a similar note, as glass has applications as a nuclear waste form to safely store radioactive materials, it is often investigated at ANSTO by spent fuel researchers.

Multiple spectroscopic and diffraction techniques were used at ANSTO in a study published in The Journal of the American Ceramic Society on a potential pyrochlore glass ceramic to contain actinide-rich radioactive waste.

The ceramic was subject to hot isostatic pressing (HIP) in an analysis that provided an improved structural understanding of the reaction interface to support the use of HIPing as a versatile hot consolidation process for the treatment of radioactive wastes. The team of ANSTO spent fuel researchers included Dr Yingjie Zhang, Tao Wei, Alan Xu, Pranash Dyal and Dr Daniel Gregg. They concluded that the approach could be adopted to study waste form interactions under HIPing conditions in broader terms, including various waste forms and types of metallic canister materials.

More generally, often glassy structures can offer optical and electronic properties that are quite distinct from their crystalline parents. For example, a large international team of researchers used the THz/Far-Infrared, Small angle X-ray scattering, and Powder diffraction beamlines at the Australian Synchrotron in their study on glasses for metal-organic frameworks. In the study published in Science, they reported on a new class of composites fabricated by means of liquid-phase sintering of crystalline lead halide perovskites and zeolitic imidazolate framework glass matrices. The research demonstrated that industrial powder processing techniques can form high-performance composites suitable for optoelectronic devices. Instrument scientist Dr Domenic Appardoo was a co-author of the paper.

Other work on glasses from the Australian Centre for Neutron Scattering includes a large international study of a liquid-liquid phase transition in the supercooled liquid of a zirconium-copper-aluminium silver glass-forming alloy. The study contributed to a much greater understanding of the structure and phase stability of metallic liquids. Multiple neutron scattering techniques were used in the study published in Applied Physics Letters. Instrument scientist Prof Elliot Gilbert was a co-author on the paper and other similar studies on metallic liquids.

Glasses can even provide a clue into the distant past and cultural heritage of the humans who used them. Ion beam analysis techniques at the Centre for Accelerator Science were used by University of Otago researchers to determine the use and distribution of obsidian ( a naturally occurring volcanic glass) by Lapita cultural groups. Because each source of obsidian has a unique elemental signature, the origin can be determined using Proton Induced Gamma Emission (PIGE) and Proton Induced X-ray Emission (PIXE). In the study reported in the Bulletin of the Indo-Pacific Prehistory Association, archaeologists compared artefacts with sources of obsidian to demonstrate that there was continuous travel back and forth between distant islands thousands of years ago.

So what makes a glass behave differently from a crystal at ambient and low temperature?
A glassy state is an unusual phase of matter, and the atomic structure is due to the way it is formed.

A mixture of materials is heated at a great temperature until it becomes molten and viscous (with the ability to flow) and then cooled quickly in water (quenched).

“The atoms aren’t given enough time or enough thermal energy to actually arrange into perfect ordered lattices. Instead, they get frozen into a kind of messy metastable solid,” explained Dr David Cortie, an instrument scientist at ANSTO who has undertaken work on metallic glasses.

“There are some interesting glasses that form even at cold temperatures. The low-temperature properties of glasses, both structural and magnetic, are among the least understood,” said Dr Cortie. “The basic situation is that the random network of atoms in a glass undergo additional atomic vibrations and quantum tunnelling at low temperature, not commonly found in crystals”.

“An example of this is glassy aluminium oxide used at the spacer layer in superconducting circuits which are the basis of quantum computing, but the glass is a major source of troublesome noise and decoherence in circuit junctions”.

Cortie and researchers from RMIT have used neutron spectroscopy to study the atomic motion in such glasses that naturally form on aluminium surfaces. Electron microscopy revealed well-defined columns in the crystalline phase but a blurry surface in the glassy phase (above).

The source of the blurry surface is the random distribution of atoms in the glass, aided by the atomic vibrations of glass atoms.

“There is plenty of evidence that the atoms in a glass are moving, undergoing additional vibrations, even at low temperature.”

“The Third Law of Thermodynamics says that change in entropy of a system must go to zero in a perfect crystal at zero temperature, but this doesn’t happen in glass. This residual entropy is associated with anomalous heat capacity, even at the very lowest temperatures,” explained Dr Cortie.

In a paper published in Physical Review Research in 2020, Dr Cortie and his collaborators used neutron spectroscopy to investigate mysterious low-temperature vibrations, known as boson peaks, in ultrathin samples of alumina glasses (Al2O3) with a glassy and crystal phase.

“We used modelling to predict structures over a range of temperatures and tested the predictions on experimental samples using ultra-sensitive neutron instruments.”

“Inelastic neutron spectroscopy is a powerful tool to study complex glasses as it offers both energy and spatial resolution to measure picosecond dynamics”.

Dr Cortie undertook the research while at the University of Wollongong, along with colleagues from the Theoretical, Computational and Quantum Physics Group at RMIT led by Professor Jared Cole. ANSTO instruments Dr Richard Mole, Dr Nicolas de Souza, Dr Dehong Yu and Dr Gail Iles (now at RMIT), contributed to the study. They also made use of the GADI supercomputer to perform molecular dynamics simulations of the glass.

“X-ray and neutrons have revealed a lot about glasses in the past one hundred years, allowing us to build better computational models”, said Dr Cortie.

“But several mysteries still remain, particularly surrounding the quantum behaviour of glasses. New experimental techniques are needed, using X-rays, electrons and neutrons. Until then, some of these mysteries will be left waiting on the next generation of young, brilliant scientists to solve.””