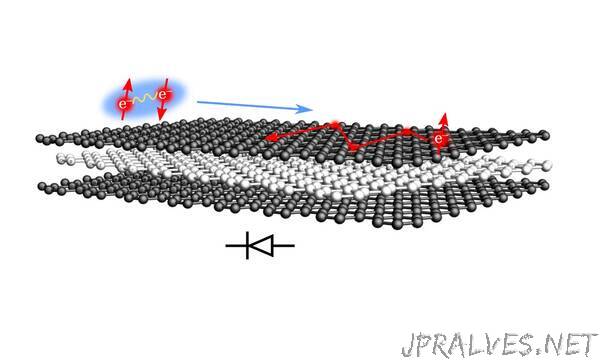 “Superconductors are the key to lossless current flow. However, the realization of superconducting diodes has only recently become an important topic of fundamental research. An international research team involving the theoretical physicist Mathias Scheurer have now succeeded in reaching a milestone: the realization of a superconducting diode effect without an external magnetic field. They report on this in Nature Physics.

One speaks of a superconducting diode effect when a material behaves like a superconductor in one direction of current flow and like a resistor in the other. In contrast to a conventional diode, such a superconducting diode exhibits a completely vanishing resistance and thus no losses in the forward direction. This could form the basis for future lossless quantum electronics. Physicists first succeeded in creating the diode effect about two years ago, but with some fundamental limitations. “At that time, the effect was very weak and it was generated by an external magnetic field, which is very disadvantageous in potential technological applications,” explains Mathias Scheurer from the IInstitute of Theoretical Physics at the University of Innsbruck. The new experiments carried out by experimental physicists at the renowned U.S. Brown University, described in the current issue of Nature Physics, do not require an external magnetic field. In addition to the aforementioned application-relevant advantages, the experiments confirm a thesis previously theorized by Mathias Scheurer: Namely, that superconductivity and magnetism coexist in a system consisting of three graphene layers twisted against each other. The system thus virtually generates its own internal magnetic field, creating a diode effect. “The diode effect observed by colleagues at Brown University was additionally very strong. Moreover, the diode direction can be reversed by a simple electric field. Together, this makes trilayer graphene such a promising platform for the superconducting diode effect,” clarifies Mathias Scheurer, who received an ERC Starting Grant this year for his research on two-dimensional materials, especially graphene.

Promising material graphene
The diode effect described in Nature Physics was also produced with graphene, a material consisting of a single layer of carbon atoms arranged in a honeycomb pattern. Stacking several layers of graphene leads to completely new properties, including the ability of three graphene layers twisted against each other to conduct electric current without loss. The fact that a superconducting diode effect exists without an external magnetic field in this system has great implications for the study of the complex physical behavior of twisted trilayer graphene, as it demonstrates the coexistence of superconductivity and magnetism. This shows that the diode effect not only has technological relevance, but also has the potential to improve our understanding of fundamental processes in many-body physics. The theoretical basis for this has already been published in another high-ranking publication.