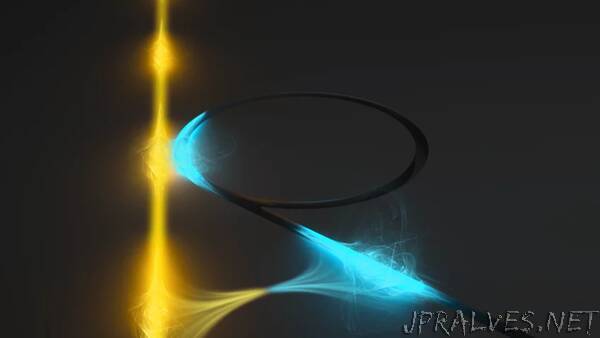 “Researchers from Göttingen (Germany) and Lausanne (Switzerland) have successfully created electron-photon pairs in a controlled way in an electron microscope for the first time. Using a new method, they could precisely detect the involved particles. The findings of the study expand the toolbox of quantum technology.

Faster computers, tap-proof communication, better car sensors – quantum technologies have the potential to revolutionize our lives just as once the invention of computers or the internet. Experts worldwide are trying to implement findings from basic research into quantum technologies. To this end, they often require individual particles, such as photons – the elementary particles of light – with tailored properties. However, obtaining individual particles is complicated and requires intricate methods. In a study recently published in the journal Science, researchers now present a new method that simultaneously generates two individual particles in form of a pair.

The international team from the Göttingen Max Planck Institute (MPI) for Multidisciplinary Sciences, the University of Göttingen, and the Swiss Federal Institute of Technology in Lausanne (EPFL) succeeded in coupling single free electrons and photons in an electron microscope. In the Göttingen experiment, the beam from an electron microscope passes through an integrated optical chip, fabricated by the Swiss team. The chip consists of a fiber-optic coupling and a ring-shaped resonator that stores light by keeping moving photons on a circular path. “When an electron scatters at the initially empty resonator, a photon is generated,” explains Armin Feist, scientist at the MPI and one of the study’s first authors. “In the process, the electron loses exactly the amount of energy that the photon requires to be created virtually from nothing in the resonator. As a result, the two particles are coupled through their interaction and form a pair.” With an improved measurement method, the physicists could precisely detect the individual particles involved and their simultaneous manifestation.

“With the electron-photon pair, we only need to measure one particle to obtain information about the energy content and temporal appearance of the second one,” emphasizes Germaine Arend, a PhD candidate at the MPI and also first author of the study. This allows researchers to use one quantum particle in an experiment while, at the same time, confirming its presence by detecting the other particle, in a so-called heralding scheme. Such a feature is necessary for many applications in quantum technology.

Max Planck Director Claus Ropers sees electron-photon pairs as a new opportunity for quantum research: “The method opens up fascinating new possibilities in electron microscopy. In the field of quantum optics, entangled photon pairs already improve imaging. With our work, such concepts can now be explored with electrons.” Tobias Kippenberg, professor at EPFL adds, “For the first time, we bring free electrons into the toolbox of quantum information science. More broadly, coupling free electrons and light using integrated photonics could open the way to a new class of hybrid quantum technologies.” (af/kr)”