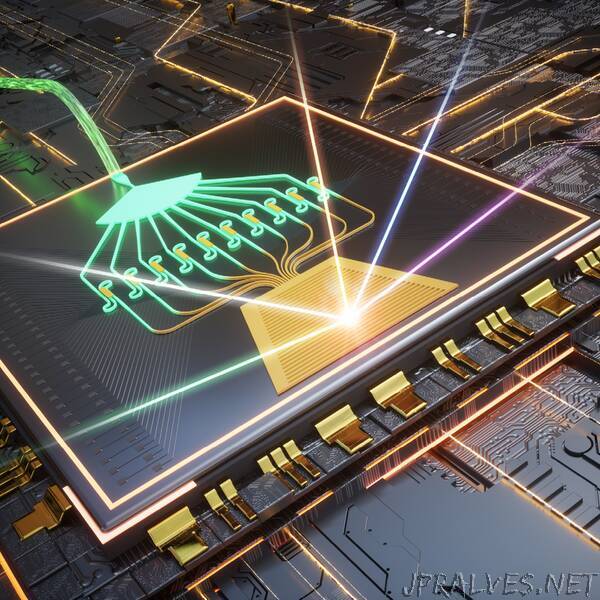 Researchers have developed a new chip-based beam steering technology that provides a promising route to small, cost-effective and high-performance lidar (or light detection and ranging) systems. Lidar, which uses laser pulses to acquire 3D information about a scene or object, is used in a wide range of applications such as autonomous driving, free-space optical communications, 3D holography, biomedical sensing and virtual reality.

“Optical beam steering is a key technology for lidar systems, but conventional mechanical-based beam steering systems are bulky, expensive, sensitive to vibration and limited in speed,” said research team leader Hao Hu from the Technical University of Denmark. “Although devices known as chip-based optical phased arrays (OPAs) can quickly and precisely steer light in a non-mechanical way, so far, these devices have had poor beam quality and a field of view typically below 100 degrees.”

In Optica, Optica Publishing Group’s journal for high-impact research, Hu and co-author Yong Liu describe their new chip-based OPA that solves many of the problems that have plagued OPAs. They show that the device can eliminate a key optical artifact known as aliasing, achieving beam steering over a large field of view while maintaining high beam quality, a combination that could greatly improve lidar systems.

“We believe our results are groundbreaking in the field of optical beam steering,” said Hu. “This development lays the groundwork for OPA-based lidar that is low cost and compact, which would allow lidar to be widely used for a variety of applications such as high-level advanced driver-assistance systems that can assist in driving and parking and increase safety.”

OPAs perform beam steering by electronically controlling light’s phase profile to form specific light patterns. Most OPAs use an array of waveguides to emit many beams of light and then interference is applied in far field (away from the emitter) to form the pattern. However, the fact that these waveguide emitters are typically spaced far apart from each other and generate multiple beams in the far field creates an optical artifact known as aliasing. To avoid the aliasing error and achieve a 180° field of view, the emitters need to be close together, but this causes strong crosstalk between adjacent emitters and degrades the beam quality. Thus, until now, there has been a trade-off between OPA field of view and beam quality.

To overcome this trade-off, the researchers designed a new type of OPA that replaces the multiple emitters of traditional OPAs with a slab grating to create a single emitter. This setup eliminates the aliasing error because the adjacent channels in the slab grating can be very close to each other. The coupling between the adjacent channels is not detrimental in the slab grating because it enables the interference and beam formation in the near field (close to the single emitter). The light can then be emitted to the far field with the desired angle. The researchers also applied additional optical techniques to lower the background noise and reduce other optical artifacts such as side lobes.

To test their new device, the researchers built a special imaging system to measure the average far-field optical power along the horizontal direction over a 180° field of view. They demonstrated aliasing-free beam steering in this direction, including steering beyond ±70°, although some beam degradation was seen.

They then characterized beam steering in the vertical direction by tuning the wavelength from 1480 nm to 1580 nm, achieving a 13.5° tuning range. Finally, they showed the versatility of the OPA by using it to form 2D images of the letters “D”, “T” and “U” centered at the angles of -60°, 0° and 60° by tuning both the wavelength and the phase shifters. The experiments were performed with a beam width of 2.1°, which the researchers are now working to decrease to achieve beam steering with a higher resolution and a longer range.

“Our new chip-based OPA shows an unprecedented performance and overcomes the long-standing issues of OPAs by simultaneously achieving aliasing-free 2D beam steering over the entire 180° field of view and high beam quality with a low side lobe level,” said Hu.

This work is funded by VILLUM FONDEN and Innovationsfonden Denmark.