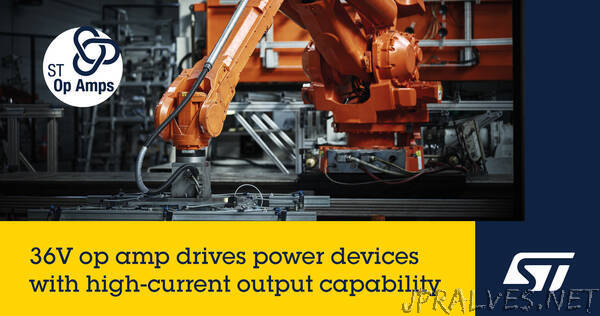 “The STMicroelectronics TSB582 dual high-output amplifier simplifies circuitry for driving inductive and low-ohmic loads like motors, valves, and rotary resolvers in industrial applications and automotive systems such as steer-by-wire and auto-parking.

The TSB582 operates from 4V-36V supplies and contains two operational amplifiers (op amps), each capable of sinking/sourcing up to 200mA. This enables direct connection of a load in bridge-tied mode, allowing one TSB582 to replace two single-channel power op amps or high-current drivers built from discrete components. While integrating two op amps into one package, the TSB582 is able to save up to 50% of board space and lowers the bill of materials.

Available in industrial- as well as automotive-grade versions, the TSB582 addresses applications such as controlling robot movements and position, conveyor belts, and servo motors. Automotive applications include motor-position sensing including steer-by-wire and electric-traction motors, as well as tracking road-wheel rotation in autonomous driver-assistance systems and self-driving vehicles.

The TSB582 comes with internal short circuit and over-temperature protection, it has rail-to-rail outputs and operates up to 3.1MHz gain-bandwidth (GBW). Both the industrial- and automotive-grade versions are qualified over a temperature range of -40°C to 125°C, are EMI hardened, and provide ESD robustness up to 4kV HBM.

There are two package options, each with low thermal resistance: an SO8 with exposed thermal pad and a 3mm x 3mm DFN8 with exposed pad and wettable flanks. The wettable flanks aid inspection after soldering to meet automotive quality-assurance requirements. The DFN8 3mm x 3mm package is available now in industrial grade. The equivalent in automotive grade and the SO8 package in both grades will be released within Q3 2022.

The TSB582 is part of ST’s 10-years longevity program and free samples are available now on the ST eStore. The unit price is $1.57 for industrial-grade and $1.80 for automotive-qualified versions, in either package style.”