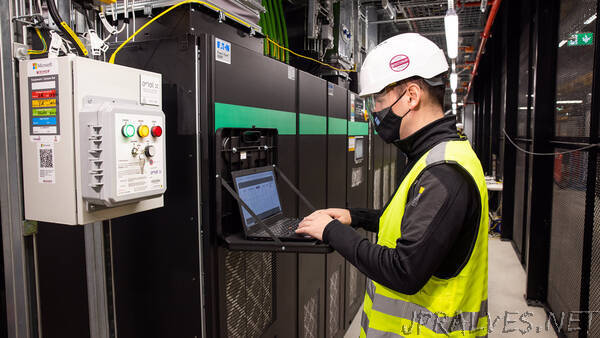 Like everywhere around the world, the intensity of the wind in Ireland fluctuates throughout the day and over the course of the seasons, which causes variable power production. As the supply of renewable energy increases, a growing problem for electric power grid operators is created. That’s because they need to only put on the exact amount of energy that users are pulling out. No more, no less.

Banks of lithium-ion batteries at a Microsoft datacenter in Dublin will be a part of the solution to this problem later this year.

These batteries, which typically provide backup power for the datacenter in case of emergency, have been certified, tested and approved for connection to the grid in a way that helps grid operators provide uninterrupted service when demand exceeds the supply generated elsewhere on the grid by wind, solar and other sources.

Providing this grid service “is a way for us to unlock the value of the datacenter,” said Nur Bernhardt, a senior program manager for energy at Microsoft.

The ability to use the datacenter’s batteries to provide these services reduces the need to maintain spinning reserve at power plants, which lowers power sector carbon emissions, Bernhardt explained.

The batteries are part of what’s called the uninterruptible power supply, or UPS, for the datacenter. The UPS in Microsoft’s Dublin datacenter includes new technology that enables real-time interaction with the electric power grid.

If grid-interactive UPS systems replace the grid services currently provided by fossil fuel power plants in Ireland and Northern Ireland, about two million metric tons of carbon dioxide emissions could be avoided in 2025, according to Baringa, an energy advisory firm that Microsoft commissioned to analyze the potential impact of the technology.

“This is definitely moving the dial on emissions at a national level,” said Mark Turner, a partner in Baringa’s energy practice who helped perform the analysis.

Two million metric tons of carbon dioxide emissions is about one-fifth of the total emissions expected across the island of Ireland from the power sector in 2025, he explained.

What’s more, by relying on grid-interactive UPS technology for grid services, end consumers across Ireland would save tens of millions of dollars on fuel and other costs required to maintain the spinning reserve at coal and natural gas fired power plants.

“The third win is you reduce the amount you have to turn down renewables,” Turner said. “That’s because if you turn gas-fired power stations on to provide this service, you’ve got to turn something else off. Often that’s renewables. If you provide this with UPS, you no longer have to do that.”

Datacenters as grid assets
People who run datacenters often talk about the “five nines” of reliability, which is shorthand for a promise to customers that the datacenter is online 99.999% of the time. To do that, datacenter operators rely in part on the batteries in the UPSs to kick on the moment a power outage occurs and provide power to the servers while the backup generators are fired up.

“The concept was to use the UPS, which is providing continuous protection, change the controller on the UPS and provide services back to the grid,” said Ehsan Nasr, a senior design researcher who works in Microsoft’s datacenter advanced development group.

This increase in volatility, in turn, increases the value of assets such as batteries that can help maintain the balance between supply and demand, he explained.

“We have this battery asset in the datacenter that is just sitting there,” Belady said. “Why don’t we offer it to the grid and come up with a dynamic way of managing it as a dual-purpose asset and thus drive more efficiency and asset utilization? That’s what drove this win-win situation.”

To that end, his team partnered with intelligent power management company, Eaton, to develop and test a grid-interactive UPS. They performed proof-of-concept experiments in 2020 at a Microsoft datacenter in Chicago and have continued to refine the technology at Microsoft’s datacenter in Quincy, Washington.

“We are making sure that we can provide the exact functionality of the UPS and, at the same time, provide ancillary services back to the grid with secure communication between the datacenter and the utility,” Nasr said.

A business case in Ireland
With the grid-interactive UPS technology demonstrated as a viable provider of grid services, the next step was to find a market with a business case for deployment, said Mycah Gambrell-Ermak, a principal program manager at Microsoft who worked on this project and is now on the supply chain strategy team.

Microsoft found an opportunity in Ireland, where variable renewables already account for more than 35% of the island’s electricity and that figure is expected to grow to 80% by 2030. This level of variable power production requires grid-stabilization services typically provided by fossil fuel power plants.

“In areas where municipalities or utilities are trying to get away from fossil-based solutions, if there is a dip in renewable reserves, what we can do as a company is take our large amount of load and we can reduce our load by putting our own batteries to use,” Gambrell-Ermak said.

EirGrid, the transmission system operator in Ireland, runs a market for grid services that prioritizes non-carbon-emitting solutions. Microsoft is participating in this market through Enel X, an energy services and solutions provider that aggregates industrial and commercial energy consumers into virtual power plants.

“Utilities, by way of aggregators, can give us a signal that tells us to discharge our batteries to compensate for our load, which then takes the burden off of the grid,” Gambrell-Ermak explained.

Blueprint for the world
EirGrid’s market for grid services is a blueprint for how technologies, such as grid-interactive UPS systems at datacenters and other industrial facilities, can help decarbonize electric power grids around the world, according to Paul Troughton, senior director of regulatory affairs for Enel X.

“I often think of Ireland as a vision of the future of what other systems’ grids will be like,” he said.

As other countries transition to a greater reliance on renewable energy, they will encounter a similar situation.

“As you add renewables, your conventional plants will retire and you can’t call on them to provide the services they would traditionally provide,” Troughton said. “You need to do something to get better at managing frequency.”

Microsoft is exploring opportunities to provide grid-stabilization services with grid-interactive UPS technology at its datacenters around the world to further accelerate progress toward grid-decarbonization, Bernhardt said.

The grid-interactive UPS initiative is part of the company’s commitment to be carbon negative by 2030, which also includes experiments at datacenters with liquid immersion cooling for servers, hydrogen fuel cells for backup power generation, along with changes in operation to increase efficiency and design such as high-density cold plate solutions.

“The long-term vision is to turn the datacenter assets into something that can provide social benefit outside of our own operations,” Bernhardt said.

EirGrid’s grid-services market, he explained, provides an opportunity for companies like Microsoft to deploy solutions that address grid reliability concerns associated with the growth of renewables.

“We can still maintain our requirements around reliability to our customers but at the same time utilize our infrastructure to provide reliability to the grid, as well as lower CO2 emissions and reduce costs for all energy consumers.””