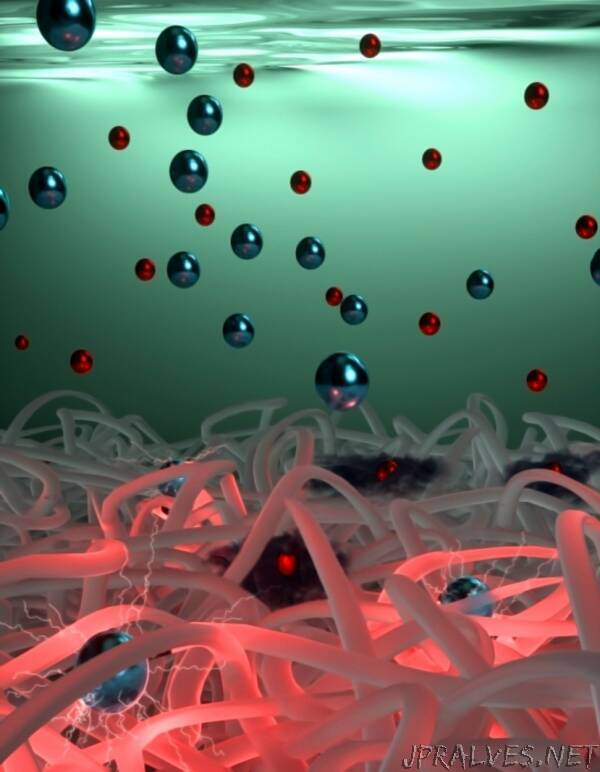 “A new material holds promise for the next generation of organic electronics.

For decades, field-effect transistors enabled by silicon-based semiconductors have powered the electronics revolution. But in recent years, manufacturers have come up against hard physical limits to further size reductions and efficiency gains of silicon chips. That has scientists and engineers looking for alternatives to conventional metal-oxide semiconductor (CMOS) transistors.

“Organic semiconductors offer several distinct advantages over conventional silicon-based semiconducting devices: they are made from abundantly available elements, such as carbon, hydrogen and nitrogen; they offer mechanical flexibility and low cost of manufacture; and they can be fabricated easily at scale,” notes UC Santa Barbara engineering professor Yon Visell, part of a group of researchers working with the new materials. “Perhaps more importantly, the polymers themselves can be crafted using a wide variety of chemistry methods to endow the resulting semiconducting devices with interesting optical and electrical properties. These properties can be designed, tuned or selected in many more ways than can inorganic (e.g., silicon-based) transistors.”

The design flexibility that Visell describes is exemplified in the reconfigurability of the devices reported by UCSB researchers and others in the journal Advanced Materials.

Reconfigurable logic circuits are of particular interest as candidates for post-CMOS electronics, because they make it possible to simplify circuit design while increasing energy efficiency. One recently developed class of carbon-based (as opposed to, say, silicon- or gallium-nitride-based) transistors), called organic electrochemical transistors (OECTs), have been shown to be well-suited for reconfigurable electronics.

In the recent paper, chemistry professor Thuc-Quyen Nguyen, who leads the UCSB Center for Polymers and Organic Solids, and co-authors including Visell describe a breakthrough material — a soft, semiconducting carbon-based polymer — that can provide unique advantages over the inorganic semiconductors currently found in conventional silicon transistors.

“Reconfigurable organic logic devices are promising candidates for the next generations of efficient computing systems and adaptive electronics,” the researchers write. “Ideally, such devices would be of simple structure and design, [as well as] power-efficient and compatible with high-throughput microfabrication techniques.”

A conjugated polyelectrolyte, or CPE-K, consists of a central conjugated backbone, with alternating single and double bonds, and multiple charged side chains with ions attached. “Having conjugated bonds throughout the polymer makes it conductive, because the delocalized electrons have high mobility across the length of the polymer,” explains lead author Tung Nguyen-Dang, a postdoctoral researcher in Nguyen’s lab who is co-advised by Visell. “You are marrying two classic materials, the polymer and the semiconductor, in this molecular design.”

Artificial intelligence (AI) played a role in developing the material. “You can proceed by trial and error to make a material,” Nguyen says. “You can make a whole bunch of them and hope for the best, and maybe one out of twenty works or has interesting properties; however, we worked with a professor at California State Northridge, Gang Lu, who used AI to select building blocks and do calculations to get a rough idea of how to proceed, given the energy level and properties we were aiming for.”

One key benefit of CPE-K is that it enables reconfigurable (“dual-mode”) logic gates, meaning they can be switched on the fly to operate in either depletion mode or accumulation mode, simply by adjusting the voltage at the gate. In depletion mode, current flowing through the active material between the drain and the source is initially high, before application of any gate voltage (a.k.a. the ON state). When the gate voltage is applied, the current drops and the transistor is turned to an OFF state. Accumulation mode is the opposite — without gate voltage, the transistor is in an OFF position, and applying a gate voltage yields higher current, switching the device to an ON state.

“Conventional electronic logic gates, which are the building blocks for all digital circuits found in computers or smart phones, are hardware that do only the one job they are designed for,” says Nguyen. “For instance, an AND gate has two inputs and one output, and if the inputs applied to it are all 1, then the output will be 1. Similarly, a NOR gate also has two inputs and one output, but if all of the inputs applied to it are 1, then the output will be 0. Electronic gates are implemented using transistors, and reconfiguring them (such as changing from an AND gate to a NOR gate) requires invasive modification, such as dismantling, which is usually too complicated to be practical.

“Reconfigurable gates, like the one we show, can behave as both types of logic gates, switching from AND to NOR and vice versa by changing only the gate voltage,” she continues. “Currently in electronics, functionality is defined by structure, but in our device you can change the behavior and make it something else just by changing the voltage applied to it. If we scale up this invention from a single gate to much more complex circuits consisting of many such reconfigurable gates, we can envision a powerful piece of hardware that can be programmed with many more functionalities than conventional ones having the same number of transistors.”

Another advantage to CPE-K-based OECTs: they can be operated at very low voltages, making them suitable for use in personal electronics. That, combined with its flexibility and bio-compatibility, make the material a likely candidate for implanted biosensors, wearable devices and neuromorphic computing systems in which OECTs might serve as artificial synapses or non-volatile memories.

“Our colleague is making devices that can monitor the drop of glucose level in the brain that occurs just before a seizure,” Nguyen explains of a collaborator at the University of Cambridge in England. “And after detection, another device — a microfluidic device — will deliver a drug locally to stop the process before it happens.”

Devices made from CPE-K feature concurrent doping and de-doping depending on the type of ions, according to Nguyen. “You make the device and put it in a liquid electrolyte — sodium chloride [i.e., table salt] dissolved in water,” she says. “You can then drive the sodium to migrate into the CPE-K active layer by applying a positive voltage at the gate. Alternatively, you can change the polarity of the gate voltage and drive chloride to migrate to the active layer. Each scenario produces a different type of ion injection, and those different ions are what allow us to change the modes of device operation.”

Self-doping also simplifies the manufacturing process by removing the extra step of adding dopants. “A lot of times when you add a dopant, it is not evenly distributed throughout the volume of the material,” Nguyen says. “The organic doping materials tend to cluster together instead of dispersing. But because our material doesn’t need that step, you don’t run into the issue of uneven dopant distribution. You also avoid the whole process of optimizing the dopant and determining the right mix and proportions, all of which add steps and complicate processing.”

The team also developed a physics model for the device that explains its working mechanism and correctly predicts its behavior in both operation modes, thus demonstrating that the device is doing what it seems to be doing.

Visell concludes, “This remarkable new transistor technology ideally exemplifies the surprising electronic and computing functionalities that are being enabled through convergent research in chemistry, physics, materials and electrical engineering.””