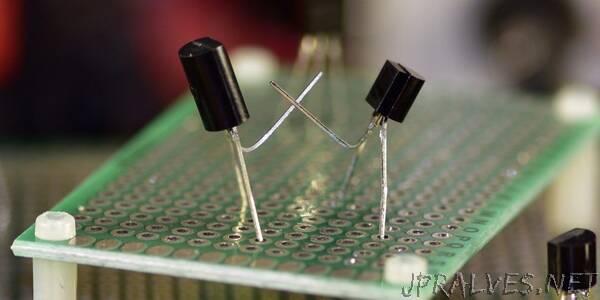 “Devices made using thin-film semiconductors have attracted much interest recently owing to new application possibilities. Among materials systems suitable for thin-film electronics, organic semiconductors are of particular interest; their low cost, biocompatible carbon-based materials and deposition by simple techniques such as evaporation or printing enable organic semiconductor devices to be used for ubiquitous electronics, such as those used on or in the human body or on clothing and packages1,2,3. The potential of organic electronics can be leveraged only if the performance of organic transistors is improved markedly. Here we present organic bipolar transistors with outstanding device performance: a previously undescribed vertical architecture and highly crystalline organic rubrene thin films yield devices with high differential amplification (more than 100) and superior high-frequency performance over conventional devices. These bipolar transistors also give insight into the minority carrier diffusion length—a key parameter in organic semiconductors. Our results open the door to new device concepts of high-performance organic electronics with ever faster switching speeds.

Organic field-effect transistors (FET) were first reported in 1986 and have shown impressive improvements in the past two decades4,5,6,7,8,9,10,11. Nevertheless, they are still restricted to the low-to-medium megahertz range, which does not allow broad application12,13,14. The substantially lower charge carrier mobility in organic semiconductors (OSCs) compared with their inorganic counterparts is a limitation to the performance of organic transistors. Reducing the length of transistor channels is an effective strategy for improving the operational speed of the device, as shown both in FET13,14 and other device concepts such as organic permeable-base transistors11,15. However, other factors, such as contact resistance and overlap capacitances, often limit further improvement of operational frequencies16,17.

A device that offers both low capacitance and contact resistance is the bipolar junction transistor. Although they have disadvantages with regard to miniaturization and process integration, bipolar transistors possess substantially higher operational speeds than comparable field-effect devices18. However, organic bipolar junction transistors (OBJTs) have not yet been realized, mainly because they rely on minority carrier diffusion through a thin and precisely doped base layer. Most studies have addressed exciton diffusion, which dominates owing to the weak dielectric screening in organic compounds19,20. Majority carrier diffusion length in fullerenes has been estimated to be on the centimetre scale, raising interesting questions about carrier diffusion physics in OSCs21,22. Charge carrier minority diffusion lengths have remained unexplored in OSC materials until now. In comparison to exciton diffusion, they can be expected to be in the nanometre range, at least for typical disordered organic films23,24,25.

Here, we realize an OBJT based on crystalline films of n- and p-type doped rubrene. In contrast to common furnace-grown single crystals, these films are made directly on the surface of a substrate and are thus compatible with mass production. We have demonstrated previously the excellent device potential of such highly ordered films by showing record-high vertical charge carrier mobilities that enabled ultrafast diode devices to operate in the gigahertz range26. Here we demonstrate that OBJTs based on crystalline rubrene thin films provide a promising route towards gigahertz organic electronics. Numerical simulations clarify the principles of transistor operation and present routes towards further optimization. A careful analysis of the device operation enables the direct measurement of minority carrier diffusion length in any OSC.

A key challenge in realizing an organic bipolar transistor is to find a suitable material and a device configuration that (1) allow both n- and p-type doping; (2) have sufficiently high (more than 1 cm2 V−1 s−1) mobility allowing for balanced hole and electron transport, giving hope that the, so far unknown, minority carrier diffusion lengths are high enough to allow the carriers to travel through the base layers; and (3) allow a sufficiently thin base held at a defined potential to allow emitter–collector current control. We made use of the highly crystalline rubrene thin-film crystals with n- and p-type doping for the construction of this OBJT and analyse its operation experimentally and theoretically (for details of materials development and characterization, see Methods).”