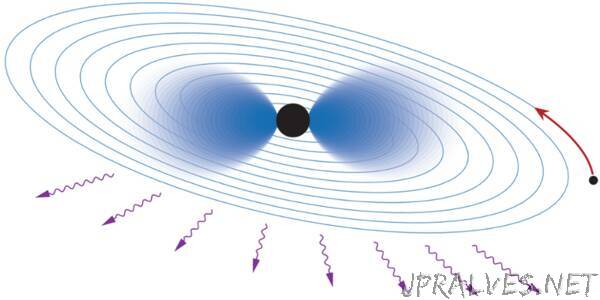 “Clouds of ultralight particles can form around rotating black holes. A team of physicists from the University of Amsterdam and Harvard University now show that these clouds would leave a characteristic imprint on the gravitational waves emitted by binary black holes.

Black holes are generally thought to swallow all forms of matter and energy surrounding them. It has long been known, however, that they can also shed some of their mass through a process called superradiance. While this phenomenon is known to occur, it is only effective if new, so far unobserved particles with very low mass exist in nature, as predicted by several theories beyond the Standard Model of particle physics.

In a publication that appeared in Physical Review Letters this week, a team consisting of UvA physicists Daniel Baumann, Gianfranco Bertone, and Giovanni Maria Tomaselli, and Harvard University physicist John Stout, suggest that the analogy between ordinary and gravitational atoms runs deeper than just the similarity in structure. They claim that the resemblance can in fact be exploited to discover new particles with upcoming gravitational wave interferometers.

In the new work, the researchers studied the gravitational equivalent of the so-called ‘photoelectric effect’. In this well-known process, which for example is exploited in solar cells to produce an electric current, ordinary electrons absorb the energy of incident particles of light and are thereby ejected from a material – the atoms ‘ionize’. In the gravitational analogue, when the gravitational atom is part of a binary system of two heavy objects, it gets perturbed by the presence of the massive companion, which could be a second black hole or a neutron star. Just as the electrons in the photoelectric effect absorb the energy of the incident light, the cloud of ultralight particles can absorb the orbital energy of the companion, so that some of the cloud gets ejected from the gravitational atom.

Finding new particles
The team demonstrated that this process may dramatically alter the evolution of such binary systems, significantly reducing the time required for the components to merge with each other. Moreover, the ionization of the gravitational atom is enhanced at very specific distances between the binary black holes, which leads to sharp features in the gravitational waves that we detect from such mergers. Future gravitational wave interferometers – machines similar to the LIGO and Virgo detectors that over the past few years have shown us the first gravitational waves from black holes – could observe these effects. Finding the predicted features from gravitational atoms would provide distinctive evidence for the existence of new ultralight particles.