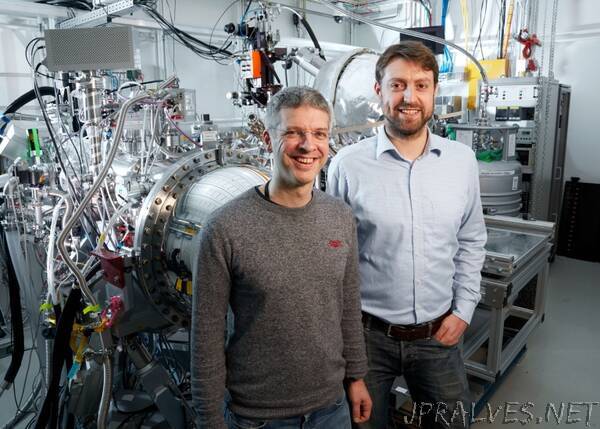 “An international research team led by researchers of Stockholm University has for the first time been able to study the surface of a copper-zinc catalyst when carbon dioxide is reduced to methanol. The results – obtained at DESY´s brilliant light source PETRA III – are published in the scientific journal Science. A better knowledge of the catalytic process of methanol synthesis and the possibility of finding even more efficient materials opens the door for a green transition in the chemical industry.

Methanol is currently one of the most important basic petrochemicals with an annual production of 110 million tones. It can be converted into tens of thousands of different products and used to make such things as plastics, detergents, pharmaceuticals and fuels. Methanol also has the potential to become a future energy carrier for example by producing aviation fuel from captured carbon dioxide and hydrogen from electrolysis of water. A future green transformation of the chemical industry, similar to the one with green steel, where wind or solar energy drives electrolytic cells is therefore a possibility.

The technical production of methanol takes place in a catalytic process where a mixture of carbon monoxide (CO), carbon dioxide (CO2) and hydrogen (H2) reacts to methanol (CH3OH). The catalyst consists of a mixture of copper, zinc oxide and aluminium oxide. However, the underlying function and the chemical state of the catalyst constituents during the reaction has never been solved – till now.

“The challenge has been to experimentally investigate the catalyst surface with surface-sensitive methods under real reaction conditions at relatively high pressures and temperatures. Those conditions have for many years not been achievable and different hypotheses about zinc being available as oxide, metallic or in alloy with copper arose but could not be unambiguously verified”, says Anders Nilsson, professor of Chemical Physics at Stockholm University.

“It is fantastic that we have been able to shed light into this complex topic of methanol formation over copper-zinc catalyst after many years of effort.” says Peter Amann, first author of the publication.

The studies have been performed at PETRA III beamline P22, dedicated to study the electronic and atomic structure of surfaces, interfaces, and bulk materials via photoelectron spectroscopy. “What is special is that we have built a photoelectron spectroscopy instrument in Stockholm that allows studies of catalyst surfaces under high pressures and thereby directly been able to observe what happens when the reaction takes place,” says David Degerman, PhD student in Chemical Physics at Stockholm University. “We have opened a new door into catalysis with our new instrument”.

“We have succeeded using our instrument to demonstrate that zinc is alloyed with copper right at the surface and this provides special atomic sites where methanol is created from carbon dioxide”, says Chris Goodwin, researcher in Chemical Physics at Stockholm University. “During industrial processes, a small amount of carbon monoxide is mixed in, which prevents the formation of zinc oxide from carbon dioxide”.

“The innovative spectroscopy instrument design from Stockholm University in combination with the PETRA III beam parameters now allows in-operando experiments of catalysts at pressures ten times higher than at other synchrotron light sources”, says DESY´s Christoph Schlueter, beamline scientist at P22. “To have our Stockholm instrument at one of the brightest x-ray sources in the world at PETRA III at DESY in Hamburg has been crucial to conduct the study”, says Patrick Lömker, Postdoc at Stockholm University. “We can now imagine the future with even brighter sources when the machine upgrades to PETRA IV”.

In the study the researchers were able to determine different behaviours of the catalyst´s surface depending on the fraction of CO and CO2 in the gas mixture – a starting point to optimize existing of even find new better catalysts. “We now have the tools to conduct research leading to possible other catalyst materials that can be used better to fit together with electrolysis-produced hydrogen for the green transition of the chemical industry, which today is completely fossil-based and accounts for 8% of the world-wide carbon dioxide emissions”, says Anders Nilsson.

The study was conducted by a collaboration of University of Stockholm with the University of Innsbruck and Vienna Technical University, DESY and the Fritz-Haber Institute in Berlin. The study included former employees at the University Peter Amann, Hsin-Yi Wang, Markus Soldemo, Mikhail Shiplin, Jörgen Gladh, Joakim Halldin Stenlid and Mia Börner.”