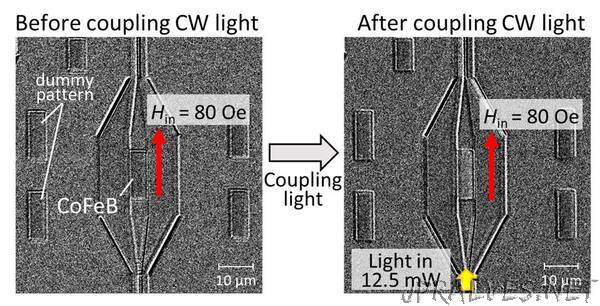 “Despite their significant advantages, magneto-optical drives have been replaced by cheaper flash drives or optical storage media such as DVDs,” said research team leader Toshiya Murai from the Tokyo Institute of Technology in Japan. “Because our new recording method can be implemented using silicon photonics, it could enable inexpensive magneto-optical devices that store large amounts of information on a small chip.”

The researchers describe their new magneto-topical memory devices and light-based writing technique in the Optica Publishing Group journal Optics Express. The devices are nonvolatile — meaning that data is saved even when no power is supplied to the device — and can withstand many cycles of writing and rewriting.

On-chip magneto-optical memories could enable all-optical alternatives to the electronic packet routers used in today’s telecommunications infrastructure. “This would eliminate the energy and expense required for optical-electrical-optical conversions and enable flexible communication for each data packet,” said Murai. “Magneto-optical memories could also offer bit-level storage for optical computers, which use light for processing, storing and transferring data.”

Magneto-optical memory devices use heat to demagnetize a small spot on a magnetic film above a critical temperature known as the Curie point. A locally applied magnetic field then determines the direction in which the spot is magnetized when it cools. Performing this type of thermomagnetic recording in a photonic integrated circuit requires controlling the magnetic state of a magnetic film inside a waveguide using light propagating in the waveguide.

In the new work, the researchers developed a way to use light propagating in the waveguide to reverse the magnetization direction by heating the magnetic recording film to near the Curie temperature. Their approach allows the material’s magnetization to be easily aligned along the direction of the applied external magnetic field.

To demonstrate the new technique, the researchers fabricated a silicon waveguide that contained a thin-film magnet. Using a special high-resolution magneto-optical Kerr effect (MOKE) microscope, they were able to measure the film’s magnetic properties for different optical powers. This allowed them to experimentally show that the coercive force of the magnet on the silicon waveguide depends on the heat induced by light guided in the waveguide.

“When light was launched into the waveguide, we observed that the magnetization direction would flip under a proper biasing magnetic field,” said Murai. “Thus, we demonstrated light-induced thermomagnetic recording integrated on a silicon photonic platform.”

Next, the researchers would like to develop solid-state magneto-optical recording systems that can not only write, but also read, information on a silicon photonic platform using the new method. This will require reducing the energy consumption of light-induced thermomagnetic recording, which could be done using a magnetic recording medium with a smaller volume combined with a shorter light pulse.