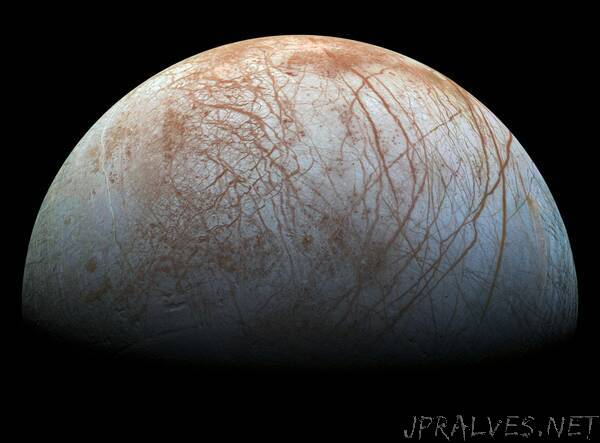 Parallel ice ridges in Greenland bear a striking resemblance to ridges on Jupiter’s ice-encased moon Europa, suggesting the moon’s icy shell could be riddled with pockets of water.

This similarity could greatly improve the odds of NASA’s Europa Clipper mission detecting potentially habitable environments on the Jovian moon. The spacecraft’s ice-penetrating radar instrument REASON (short for Radar for Europa Assessment and Sounding: Ocean to Near-surface) will be ideal for conducting such a search.

“If there are pockets of water under the ridges, we have the right instruments to see them,” said Dustin Schroeder, a Stanford University associate professor and coauthor of a new study comparing Greenland’s “double ridges” with those of Europa.

Scientists say evidence gathered so far shows that Europa harbors a deep liquid ocean, hidden beneath an ice shell that could be 10 to 15 miles (15 to 25 kilometers) thick. Because the ice is so substantial, a big question about the moon is whether anything from the deep ocean makes contact with the surface – or if contact goes the other way, with surface material filtering down to the ocean water.

“It’s exciting, what it would mean if you have plenty of water within the ice shell,” said coauthor Gregor Steinbrügge, a former Stanford researcher who is now a planetary scientist at NASA’s Jet Propulsion Laboratory in Southern California. “It would mean the ice shell on Europa is extremely dynamic. It could facilitate exchange processes between the surface and the subsurface ocean. It could go in both directions.”

Potential life-sustaining nutrients on Europa’s surface – perhaps deposited there by another Jupiter moon, volcanic Io – might find their way to the subsurface ocean, he said. And chemicals or other material from the subsurface indicating a habitable ocean environment could end up on the surface.

How Ridges May Have Formed

During a presentation on Europa’s ridges, the study’s lead author, Stanford graduate student Riley Culberg, said he noticed similar landforms in Greenland. Ice-penetrating radar data collected from 2015 to 2017 by NASA’s Operation IceBridge, an aerial observation campaign, showed not only the existence of a double ridge in northwestern Greenland, but also details of how it evolved.

The double ridges observed on the surface of the Greenland Ice Sheet formed when water from nearby surface lakes drained into a layer of impermeable ice within the ice sheet. Once there, the water pocket refroze and fractured the overlying ice, forcing peaks to rise on either side.

Something similar could be happening on Europa, but instead with water forced up toward the surface from the subsurface ocean. The ridge features on Europa, while similar to the Greenland ridges, are much larger and with taller peaks, perhaps due in part to lower gravity on Europa.

Europa Clipper’s REASON instrument is designed to make the same kind of measurements at Europa that the IceBridge radar made in Greenland. Both use radio waves that can penetrate deeply into ice. The same waves, however, cannot penetrate liquid water and are instead reflected back to the radar instrument. Water shows up as a bright patch in the radar images. These radargrams can therefore provide a vertical profile of water and ice deep below the surface.

“You get reflections that are a thousand times brighter for water as opposed to ice,” Schroeder said.

Schroeder, a co-investigator on REASON and part of a group that studies Europa’s interior, said the new study could help the Europa Clipper team design observations to determine whether the ridges on the moon and in Greenland arose from the same underlying causes – and whether water pockets are common within Europa’s icy shell.

The study also highlights the growing synergy between scientists who study our planetary neighbors in the solar system and those who focus on Earth.

“This research will help us either use Earth to understand what we will see on Europa or, when we get to Europa, help us interpret what we see when we get there,” Schroeder said.”