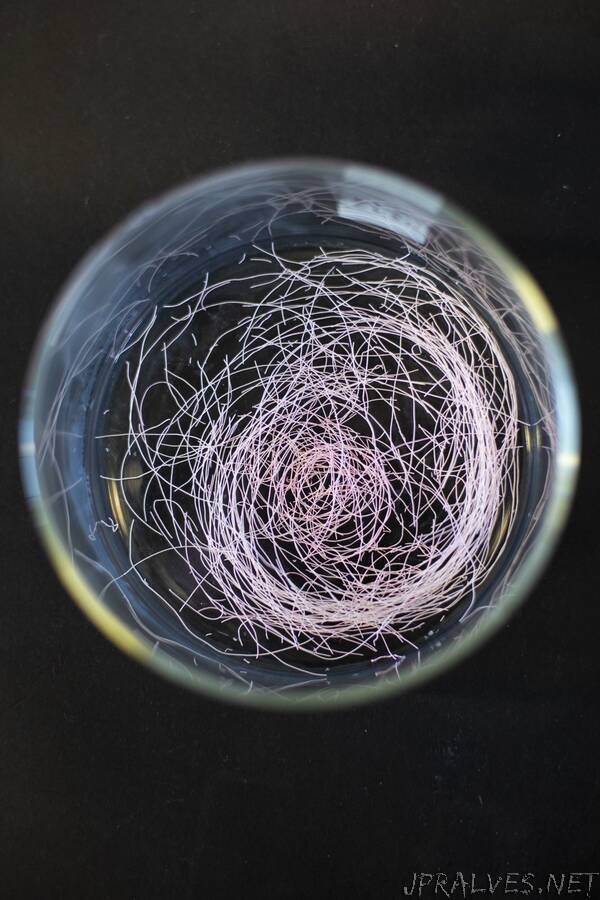 “Nanomaterials scientists from Utrecht University have improved a nanogel in such a way that it can now transport individual molecules from one liquid to the other. “By enlarging the surface area between two liquids, we can increase the exchange of chemicals. This technique can make industrial processes more energy efficient and open possibilities to make better solar cells.” The researchers’ paper was recently published by the scientific magazine Advanced Materials.

Physical Chemist Martin Haase and his research group work on techniques to make so-called bijels: emulsions of two liquids that do not mix, like oil and water, separated by an ultra-thin layer of nanoparticles that stabilizes the surface between the fluids. “In such gel-like materials, two repellent liquids are interwoven”, Haase explains. “At the interface of the two, molecules can move from one liquid to the other through the nanolayer.”

The gels work best if the interface between the two liquids has a large surface. Haase: “Our own bodies show good examples of such processes. Think of our lungs: they inhale air, and the oxygen in the air goes into the blood. It is transported from air channels to blood capillaries. In a bijel, molecules can be exchanged in a similar fashion from one fluid to another.”

Gentler way of removing chemicals
With the help of PhD researchers Mohd Khan and Alessio Sprockel, Haase now improved the technique to make such bijels. Haase: “I discovered how to make bijels in 2015. But we had limited control over it and our structures were not so well defined. Now we can fully control the synthesis. We can now make smaller and more uniform channel structures, have fluids flow through the channels, and separate chemicals continuously during this flow.”

To make a bijel, the scientists of the Utrecht University Van ‘t Hoff Laboratory for Physical and Colloid Chemistry use alcohol and nanoparticles, little glass spheres with a diameter of only 20 nanometers. Haase: “Oil and water do not mix. However, if you add alcohol, they actually do mix well. And if you subsequently remove the alcohol from this mixture, the two liquids will form an interwoven arrangement of liquid channels. During this process, the nanoparticles are picked up by the interface between oil and water. Once there, they stabilize the interwoven oil and water channels to form the bijel.”

A vital step that then needs to be taken before a bijel can be used for industrial separations, is to collect the separated chemicals. Haase: “Just like blood flows through capillaries in the lung to harvest oxygen, water and oil must flow through the bijel to transport extracted chemicals in and out of the nanogel. But because the channels in the bijel are so small, a normal pump would need to push very hard. This would cost lots of energy and can, moreover, break the fragile bijels. We have discovered that liquids can be pumped through the bijel via a process called electro-osmosis, a much gentler way of liquid transport.”

Nanomaterials for a sustainable industry
According to Haase, the invention has potential to save energy in industrial processes involving the separation of chemicals. “For me, a motivation to work in this scientific field, is to make the chemical industry more sustainable. Many products we use in our daily lives, for example plastics, gasoline, or pharmaceuticals need to be purified during their production. This requires a lot of energy because mixtures have to be boiled, a process commonly known as distillation. Such separations of chemicals consume up to 15% of our worldwide energy use. So we need to find alternatives that are less energy consuming and also emit less carbon dioxide. In a bijel, the separation of chemicals is possible without boiling and therefore, a lot of energy is saved.”

But the high surface area within the bijel opens other application potentials as well. Haase: “Bijels can for instance provide opportunities to develop more efficient solar cells and also separation membranes that can turn seawater into drinking water. Now that we can have liquids flow through the microscopic channels of the bijel, so many exciting opportunities for using these novel nanogels as materials for sustainable technologies become possible.””