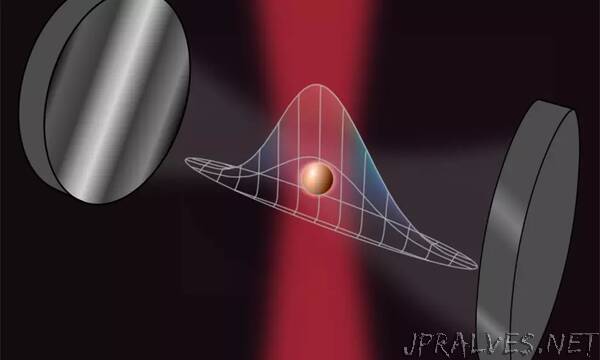 “Sensors are a pillar of the Internet of Things, providing the data to control all sorts of objects. Here, precision is essential, and this is where quantum technologies could make a difference. Researchers in Innsbruck and Zurich are now demonstrating how nanoparticles in tiny optical resonators can be transferred into quantum regime and used as high-precision sensors.

Advances in quantum physics offer new opportunities to significantly improve the precision of sensors and thus enable new technologies. A team led by Oriol Romero-Isart of the Institute of Quantum Optics and Quantum Information at the Austrian Academy of Sciences and the Department of Theoretical Physics at the University of Innsbruck and a team lead by Romain Quidant of ETH Zurich are now proposing a new concept for a high-precision quantum sensor. The researchers suggest that the motional fluctuations of a nanoparticle trapped in a microscopic optical resonator could be reduced significantly below the zero-point motion, by exploiting the fast unstable dynamics of the system.

Particle caught between mirrors
Mechanical quantum squeezing reduces the uncertainty of motional fluctuations below the zero-point motion, and it has been experimentally demonstrated in the past with micromechanical resonators in the quantum regime. The researchers now propose a novel approach, especially tailored to levitated mechanical systems. “We demonstrate that a properly designed optical cavity can be used to rapidly and strongly squeeze the motion of a levitated nanoparticle,” says Katja Kustura of Oriol Romero-Isart’s team in Innsbruck. In an optical resonator, light is reflected between mirrors and it interacts with the levitated nanoparticle. Such interaction can give rise to dynamical instabilities, which are often considered undesirable. The researchers now show how they can instead be used as a resource. “In the present work, we show how, by properly controlling these instabilities, the resulting unstable dynamics of a mechanical oscillator inside an optical cavity leads to mechanical squeezing,” Kustura says. The new protocol is robust in the presence of dissipation, making it particularly feasible in levitated optomechanics. In the paper, published in the journal Physical Review Letters, the researchers apply this approach to a silica nanoparticle coupled to a microcavity via coherent scattering. “This example shows that we can squeeze the particle by orders of magnitude below the zero-point motion, even if starting from an initial thermal state,” Oriol Romero-Isart is pleased to say.

The work provides a new use of optical cavities as mechanical quantum squeezers, and it suggests a viable new route in levitated optomechanics beyond the quantum ground state cooling. Micro-resonators thus offer an interesting new platform for the design of quantum sensors, which could be used, for example, in satellite missions, self-driving cars, and in seismology. The research in Innsbruck and Zurich was financially supported by the European Union.”