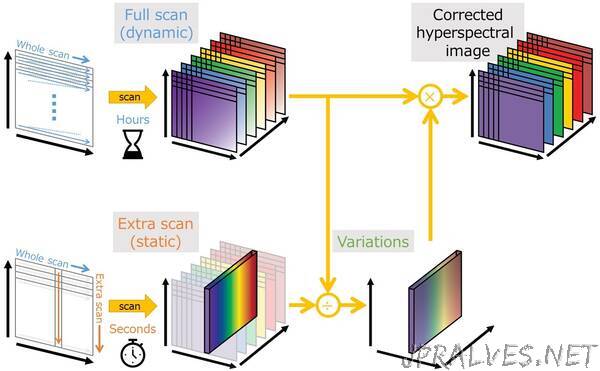 “Researchers at Nara Institute of Science and Technology develop a new mathematical method to calibrate scans of stained-glass windows to account for changes in natural light, which may help assist in the accurate preservation of famous artworks

Scientists from Nara Institute of Science and Technology created a new approach to compensate for variations in illumination while scanning cathedral stained-glass windows. This work may be applied to other objects of cultural significance to help capture their colors in the most lifelike way.

It’s hard to think of a more inspirational experience than watching the sun slowly set through historic stained-glass windows, such as those found in the cathedrals in Europe. While the changing light levels over time may be breathtaking, it also makes high-resolution scans of the windows more challenging. That is, if the scanning process requires minutes or even hours to complete, variations in the natural illumination can lead to inconsistent results.

Now, a team of researchers led by Nara Institute of Science and Technology has developed a new calibration method to help compensate for changes in the sun’s illumination over the course of the scan. “It can take hours to capture thousands of spectral channels pixel by pixel. Thus, the measurement can be significantly affected by the perturbations in natural light,” first author Takuya Funatomi says.

The researchers set out to capture hyperspectral images of the famous stained-glass windows in the Amiens Cathedral in France. With some window panels dating back to the 13th century, this location which has been designated as a UNESCO World Heritage Site. A whisk-broom scanner was used to acquire hyperspectral images. This kind of sensor uses a movable mirror to slowly scan across an object. Each pixel is measured one at a time as its light is reflected onto the single detector with the sky in the background. However, when it is applied to outdoor cultural heritages, temporal illumination variations become an issue due to the lengthy measurement time. Hyperspectral scanning is not limited to the wavelengths of light that are visible to humans. For this research, the team used a spectrometer that recorded more than 2,000 channels over a spectrum ranging from about 200 nm to 1100 nm, which includes ultraviolet, visible and infrared colors.

An extra single column scan was added to help calibrate the images. Using matrix methods, variations in temporal illumination could be removed. This allowed for much more accurate results compared with simply normalizing the total brightness, because each color might be impacted differently by the changing light. “Our method provides a new modality for the digital preservation of large cultural assets,” senior author Yasuhiro Mukaigawa says. This method can be easily adapted to other situations in which outdoor scanning has to occur over long time periods.”