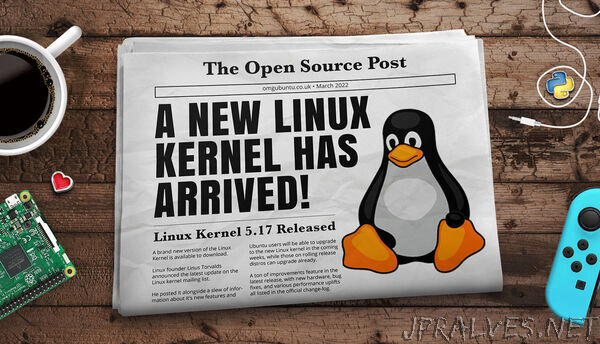 Linus Torvalds, announcing the release on the Linux Kernel Mailing List, says the one-week delay (to account for lately-revealed security issues) meant “…we did get a few last-minute reverts and fixes in and avoid some brown-paper bugs that would otherwise have been stable fodder, so it’s all good.”

Linux Kernel 5.17 Features
Chief among the features baked in to the Linux 5.17 kernel is a new AMD P-State driver (for compatible hardware, i.e. Zen 2 and newer, basically). Valve is said to have helped in the creation of this driver (thanks to Steam Deck handheld gaming PC) and it promises to offer better power efficiency than the standard ACPI CPUFreq driver.

There is, as always, a fresh dollop of support fornext-generation processors from both AMD and Intel, as well as enablement work to support Intel’s upcoming Alchemist graphics cards.

Sticking with Intel, the company’s new “platform firmware runtime update” driver (nicknamed PFRUT) is present in Linux 5.17. This, LWN say, allows “parts of the system firmware to be updated without the need to restart the system” — handy!

On the hardware front you’ll find a crop of ASUS motherboards gain working hardware sensor support with this kernel; there’s a new hardware monitoring driver for NZXT devices; and this kernel uplift includes support for various 2021 Apple Magic keyboards, including models with number pad and the fingerprint reader.

Also introduced in Linux 5.17 is support the new Universal Stylus Initiative (USI). This is an industry-led effort to create a common specification that will allow input styli to function cross-device, and irrespective of vendor. Early stage right now, but promising stuff.

Most major filesystems pick up tweaks in this release, with BTRFS and EXT4 both getting performance boosts. The former has halved the amount off metadata it logs by only copying index keys, while the latter picks up a new mount API and support for get/set fs labels

More details on Linux 5.17 can be found on the KernelNewbies wiki, or by reading the LWN merge roundup part 1 and part 2.

Rolling release distros will likely package up and push out this kernel as an update in the coming weeks, but fixed release distros like Ubuntu generally don’t. You can install mainline kernel builds on Ubuntu but keep in mind these are intended for developers rather than end users and don’t include Ubuntu-specific patches.”