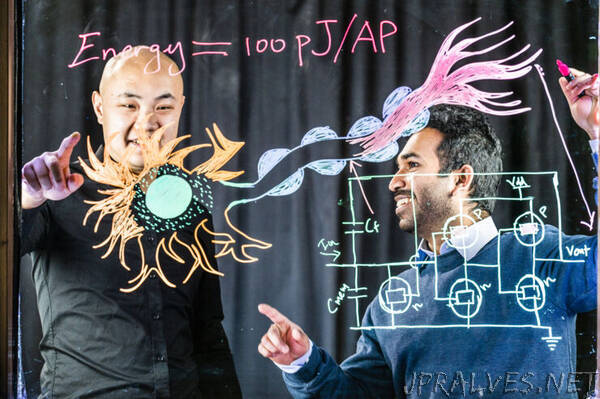 On connecting to the carnivorous Venus flytrap, the electrical pulses from the artificial nerve cell can cause the plant’s leaves to close, although no fly has entered the trap. Organic semiconductors can conduct both electrons and ions, thus helping mimic the ion-based mechanism of pulse (action potential) generation in plants. In this case, the small electric pulse of less than 0.6 V can induce action potentials in the plant, which in turn causes the leaves to close.

“We chose the Venus flytrap so we could clearly show how we can steer the biological system with the artificial organic system and get them to communicate in the same language”, says Simone Fabiano, associate professor and principal investigator in organic nanoelectronics at the Laboratory of Organic Electronics, Linköping University, Campus Norrköping.

Complementary circuits
In 2018 the research group at Linköping University became the first to develop complementary and printable organic electrochemical circuits – that is, with both n-type and p-type polymers, which conduct negative and positive charges. This made it possible to build printed complementary organic electrochemical transistors. The group has subsequently optimised the organic transistors, so that they can be manufactured in printing presses on thin plastic foil. Thousands of transistors can be printed on a single plastic substrate. A researcher holds a plastic foil with thousands of printed transistors.

Together with researchers in Lund and Gothenburg, the group has used the printed transistors to emulate the neurons and synapses of the biological system. The results have been published in the prestigious journal Nature Communications.

“For the first time, we’re using the transistor’s ability to switch based on ion concentration to modulate the spiking frequency”, says Padinhare Cholakkal Harikesh, post-doctoral researcher at the Laboratory of Organic Electronics.
The spiking frequency gives the signal that causes the biological system to react.

Learning behaviour
“We’ve also shown that the connection between the neuron and the synapse has a learning behaviour, called Hebbian learning. Information is stored in the synapse, which makes the signalling more and more effective”, says Simone Fabiano.
The hope is that artificial nerve cells can be used for sensitive human prostheses, implantable systems for relieving neurological diseases, and soft intelligent robotics.

“We’ve developed ion-based neurons, similar to our own, that can be connected to biological systems. Organic semiconductors have numerous advantages – they’re biocompatible, biodegradable, soft and formable. They only require low voltage to operate, which is completely harmless to both plants and vertebrates” explains Chi-Yuan Yang, post-doctoral researcher at the Laboratory of Organic Electronics.