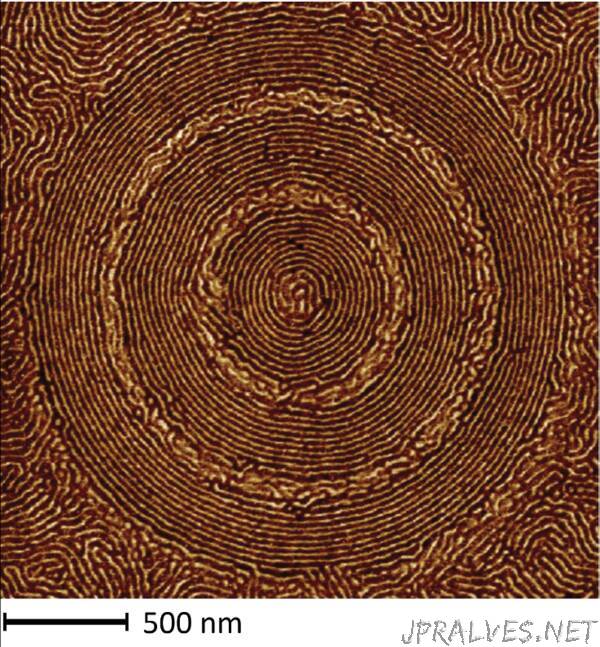 “Breakthrough could enable large-scale manufacturing of nanomaterials for industry

A research team led by Lawrence Berkeley National Laboratory (Berkeley Lab) has demonstrated tiny concentric nanocircles that self-assemble into an optical material with precision and efficiency.

Their work overcomes a longstanding problem in nanoscience – molecular impurities. The researchers described their work in the journals ACS Nano and Advanced Materials.

The new findings could enable the large-scale manufacturing of multifunctional nanocomposites – materials made from different components on a scale of a billionth of a meter. Such materials could enable advanced fiberoptics for high-speed broadband telecommunications, and multifunctional coatings for buildings, automobiles, and aerospace.

As reported in ACS Nano, the new technique coaxes diverse blends of polymers and nanoparticles into spontaneously forming tiny nested rings within minutes of adding an impurity, such as a small organic molecule, to the mix.

“This completely surprised us,” said senior author Ting Xu, a senior faculty scientist in Berkeley Lab’s Materials Sciences Division and professor of chemistry and materials science and engineering at UC Berkeley. “In nanoscience, a material typically has to have perfect ingredients with chemical affinities or compatibilities, or else it’s ‘garbage in, garbage out.’ So when we first made the observation over 10 years ago, we couldn’t explain it – but it turns out by increasing the ingredient diversity, the complex system gains the ability to self-adapt and work around imperfections in a controlled manner.”

This molecular migration, they predicted, would unlock the system’s entropy, a type of energy that helps to distribute the material’s building blocks, and drive the inorganic nanoparticles to organize into a series of concentric rings.

The team then conducted electron microscopy experiments at Berkeley Lab’s Molecular Foundry, and X-ray studies at Berkeley Lab’s Advanced Light Source, to reveal the structure and spatial distribution of each ingredient in the resulting materials.

Through those experiments, the Xu team proved that nanocomposite blends containing four or more components of various sizes and chemistries, including complex polymers and nanoparticles, can accommodate impurities.

Moreover, they demonstrated that adding just the right amount of impurities – in this case, small organic molecules – to a nanocomposite causes the other molecules in the mixture to spontaneously form perfectly nested nanorings within minutes.

“This is a more forgiving approach for manufacturers to engineer functional nanomaterials on a large, commercial scale,” Xu said. “The formulation is no longer confined to a specific combination of building blocks, and you can adjust which molecules to use based on the end needs.”

Can self-assembled nanocircles direct beams of light?
In a subsequent Advanced Materials study, Xu and her team demonstrate concentric rings that self-assemble from various polymer solutions “as a test bed to see how much we can control the system – and to see how the system responds to impurities,” she said.

Using their technique, the Xu team produced self-assembling nanocircles just 500 nanometers in diameter – as small as or even smaller than wavelengths of light.

“And that is really important if we want to use these microscopic structures to control the propagation of light” in fiberoptic communications or opto-electronics, said Jie Yao, a faculty scientist in Berkeley Lab’s Materials Sciences Division and associate professor of materials science and engineering at UC Berkeley who co-led the Advanced Materials study with Xu.

A team led by Yao put the nanocircles to test in experiments at UC Berkeley and Berkeley Lab’s Materials Sciences Division. The researchers found that when they pulsed a beam of visible light through a concentric nanocircle, the structure interacts with a physical property of light called orbital angular momentum or OAB, which transforms the shape of the beam into a spiral or helix.

They also learned that certain nanocircle designs can direct light to spiral left or right – a property in physics known as helicity.

Nanomaterials that encode helicity into beams of light could double or even triple the bandwidth of conventional fiberoptics for internet communications, Yao added, and advance new wireless communications technologies such as free-space optics.

The new technique could also save industry time and money. “With the Xu team’s approach, it takes just minutes to make a nanostructure, so the cost is reduced and the approach is repeatable again and again, and is suitable for mass production,” he said.

“We believe nanocomposites are the future of functional materials,” Xu said. “After over a dozen years of exploration, we finally overcame a bottleneck in translating what researchers learn in the lab to real-world manufacturing. That is very satisfying.”

Katherine Evans and Emma Vargo from the Xu lab at UC Berkeley fabricated the nanorings for the studies.

The Advanced Light Source and Molecular Foundry are user facilities at Berkeley Lab.

The work was supported by the DOE Office of Science.”