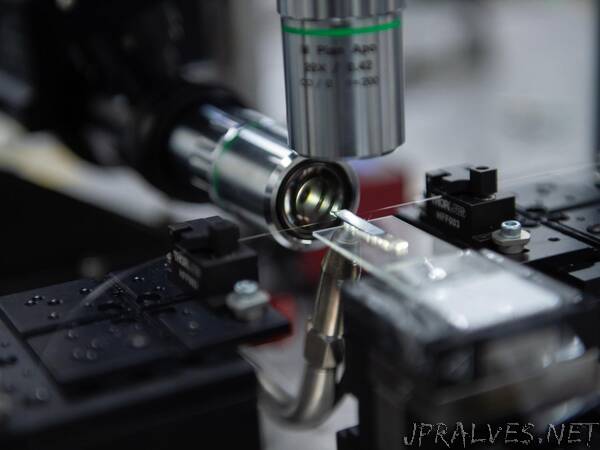 By demonstrating exceptional control of an open optical system, an international research team has provided a path to experimentally measure and test exotic phenomena and gain insights into new physics with exquisite sensitivity.

Reported in Nature Communications, the Penn State, Michigan Technological University and Vienna University of Technology researchers created a stable surface of ‘exceptional’ points — notoriously finicky singularities that exhibit peculiar properties — and used it to facilitate and observe the perfect absorption of light in a coherent, chiral system. When light enters the system, which operates as a surface full of exceptional points, in one direction, the light is completely absorbed. When entering from the opposite direction, relatively little light is absorbed.

“Our work points the way towards interesting new physics with exceptional points beyond their traditional habitat in sensing and lasing, where many more insights can be expected,” said corresponding author Şahin Özdemir, associate professor of engineering science and mechanics at Penn State. Harnessing the unique properties of exceptional surfaces, Özdemir explained, could elucidate to a deeper understanding of what happens when physical processes occur exactly at an exceptional point, leading to potential applications for better sensors and novel ways of controlling the interaction of light with matter.

Open systems constantly move energy in and out, shifting their parameters and how they react to moving variables in their surrounding environment. In this dance of change, the value of any spectral point in the system can coalesce with the value of another spectral point, drawing them together as a spectral singularity — an exceptional point. Incredibly sensitive, exceptional points respond to any interference with strong, measurable signals. Even the smallest of perturbations can knock the exceptional point enough for it to dissociate and become unexceptional, according to Özdemir.

“The downside of this fragility is that it becomes very difficult to operate a system at an exceptional point without being driven away from the singularity, which poses a serious challenge for exploiting exceptional points for practical applications,” Özdemir said, explaining that moving close to an exceptional point introduces noise to the system. “You can bring your system close to these points in a huge space, but you may fail to stabilize the system long enough to study precisely at those exceptional points. So, what if every point in that space was exceptional?”

Following their earlier theoretical proposals, published in Physical Review Letters and Optics Letters, the researchers placed a mirror at one end of a waveguide, a structure that encourages light waves to follow a particular path. The waveguide was outfitted with a microresonator, which supports light propagation in clockwise and counterclockwise directions at the same frequency. The researchers coupled light to the resonator, bringing its frequency to that of the exceptional point and sent it into the system — either in a clockwise or counterclockwise direction. Clockwise light traveled along a tapered fiber guide until it encountered the mirror and was reflected in the direction from where it came. Counterclockwise light did not encounter the mirror, so it traveled the system once before dispersing. Detectors on either end tracked light that escaped the system.

The lineshape refers to the shape of the measured spectrum. ​Light sent clockwise first entered the resonator at the exceptional point frequency and was partially absorbed, with the rest continuing to the mirror. The reflected light traveled back through the resonator, perfectly overlapping with the resonance and absorbing completely. The measured spectra revealed a squared Lorentzian lineshape — the formerly theoretical flat top. Light sent in a counterclockwise direction only went through the resonator once, since it was not reflected. The measured results demonstrate the system’s chirality, or how different directional inputs cause different behavior.

“We saw chiral perfect absorption in an exceptional surface in an open system,” said first author Sina Soleymani, postdoctoral researcher in engineering science and mechanics. Soleymani completed his doctoral research on this project prior to graduating from Penn State in 2021. “The mirror allows the exceptional surface to form because it couples the modes to one another in a chiral manner.”

“It’s so stable and simple,” Solyemani said. “Just a mirror in one end of the waveguide gives us the beautiful surface to more easily investigate both the classical and quantum dynamics at exceptional points.”

The U.S. Department of Defense Air Force Office of Scientific Research has funded this work, in part, through a Multidisciplinary University Research Initiative led by Özdemir.