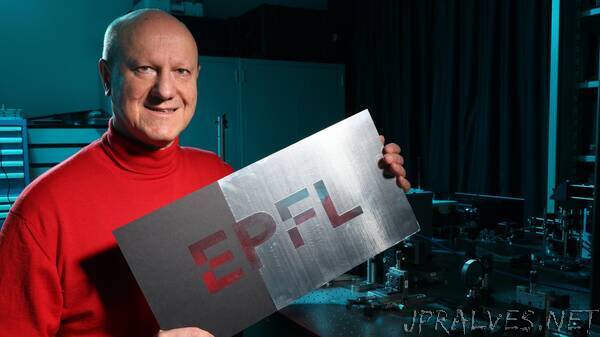 “EPFL researchers have developed a new type of printing process that involves removing material rather than depositing it. Their method could be particularly useful for printing banknotes and ID documents, for example.

“We’ve developed an entirely new printing process, turning Guttenberg’s concept on its head,” says Prof. Olivier Martin, head of the Nanophotonics and Metrology Laboratory at EPFL’s School of Engineering. Martin proudly displays a representation of EPFL’s logo produced using his team’s breakthrough method. The letters in the logo are transparent, while their edges are black or aluminum-colored. The researchers’ initial goal was to develop a material that absorbs light completely. They created a material composed of three layers – first aluminum, then magnesium fluoride (a dielectric compound) and finally chrome – sitting on a Plexiglas substrate. Each layer is just a few nanometers thick. The end result is a black surface that absorbs all light waves. “Black is a really hard color to obtain,” says Martin. “You usually end up with something that has either bluish or violet undertones. But in our case, the black we obtained was truly black. That means our material can capture 100% of the light it’s exposed to.”

Sebastian Mader, the PhD student who led the project, wanted to see what would happen if he removed the top layer of the material: the chrome. “Once I did that, all that was left was the dielectric compound and the aluminum,” he says. “Together, these two compounds form a perfect mirror. They reflect all wavelengths of light, absorbing none of it.” He then went further and removed these two layers, leaving only the Plexiglas substrate. “That gave us a fully transparent surface,” says Mader.

The researchers removed the individual layers using a laser. It was so precise that they were able to thin the layers out as much or little as they wanted in order to reproduce the full spectrum of shades between black and transparent. “The longer we left the laser on a given spot, the more material it removed,” says Martin. “We basically ‘drew’ lines of transparency rather than lines of color.” Their new method could be especially useful in security applications and for printing banknotes. “Contrast is very important for our eyes, and since our method can produce both fully black and fully transparent areas, we can generate a lot of contrast,” says Martin. “For instance, we can draw white letters on a black background, making the letters very easy to read.” Their study appears in Light: Advanced Manufacturing.”