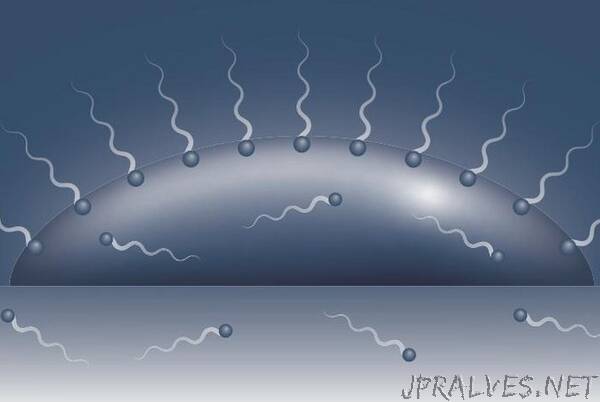 “Ruben van Gaalen found out how to avoid the ‘coffee-stain effect’ when droplets dry up, so that printing companies can develop ink more efficiently.

Have you ever spilled coffee onto a table? If so, you have probably noticed that the resulting stain is not nicely uniform but has a notable ring around it. This forgettable oddity is daily business in the printing industry, where such a drying pattern is detrimental to the final quality. Mechanical engineer Ruben van Gaalen investigated this problem by focusing on a promising solution: the use of surfactant molecules.

The drying of a droplet on a substrate is a complicated process. Close to the edges of the droplet the evaporation is much faster than over the rest of the surface. While this was discovered only twenty years ago, we most certainly already knew about daily occurrences of this effect.

For example, a plate with hot food always cools down fastest on the edges, because there are more directions for the heat to leave the area. In a similar way, evaporated molecules can leave the area more easily at the edges of the droplet.

COFFEE-STAIN EFFECT
Because of the faster drying on the edges there is a constant fluid flow from the drop center towards the outer parts, which is why we see ring formation. In scientific literature this phenomenon is called the ‘coffee-stain effect’.

This is where surfactants come in. Surfactants are molecules that consist of two parts: a water-loving (hydrophilic) head, which is attracted to water, and a water-hating (hydrophobic) tail, which is repelled by water. Because of this dual nature of surfactants, they tend to reside on the surface of the droplet, where their hydrophilic head can remain in contact with the water and their hydrophobic tail with the air.

When these surfactants stick onto the droplet surface, the surface tension is reduced, which is the force that allows for example water striders to glide over the water surface without sinking.

Because this reduction in surface tension is not uniform along the drop surface, all kinds of `weird’ flow patterns are observed in the droplet. One of these flow patterns is a circulation, where ink particles flow back to the center of the droplet, thereby suppressing the coffee-stain effect.

DEVELOP INKS WITHOUT TRIAL-AND-ERROR
Up to now it remained unclear under what circumstances circulation would occur. Not all surfactants and not all droplets display this behavior. Using efficient computer simulations Van Gaalen identified several predictive factors that determine the flow patterns in the droplet.

He found that for circulation to occur it is important that there is also surfactant in the bulk of the droplet and that the evaporation needs to be relatively fast. With these findings, experimental results that were previously unexplainable can now be understood better. Printing companies can use this knowledge to develop inks without having to resort to trial-and-error methods.

Besides the coffee-stain effect, Van Gaalen also investigated how the shape of a surfactant-laden droplet changes over time during evaporation and how surfactants affect the process of droplets being sucked into porous media, like paper.