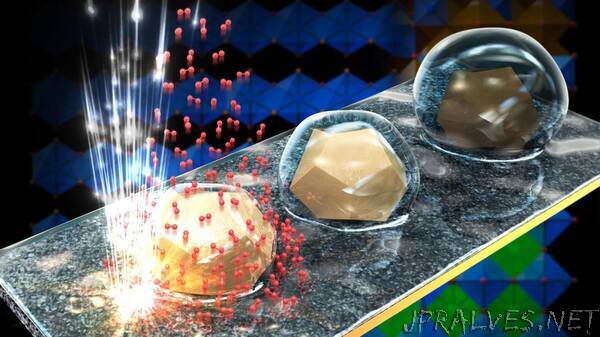 “EPFL scientists have observed how catalysts behave at the particle level during water electrolysis. Catalysts play a crucial role in this reaction, in which water splits into hydrogen and oxygen. By shedding light on the underlying mechanism of the functional role of catalysts during the reaction, the scientists have made an important discovery for the design of renewable-energy storage systems.

If renewable energies are one day to replace fossil fuels, engineers need to find a way to store it reliably and on a large scale. One method that numerous researchers are currently studying involves storing the energy in gaseous form inside electrolytic cells.

Catalysts are used to speed up electrocatalytic reactions without being consumed in the process. The catalysts used for water electrolysis are metal oxides, some of which tend to work better than others – although the exact reason remains unknown. “We’ve been able to see that during water electrolysis some oxides are particularly effective, robust, and stable,” says Vasiliki Tileli, an assistant professor and head of EPFL’s Laboratory for in situ Nanomaterials Characterization with Electrons. “But we can’t really explain why these oxides function better, since we don’t know exactly what happens to the catalyst during the reaction.”

In order to find this out, Tileli and Tzu-Hsien Shen, a PhD student at her lab, observed water electrolysis reactions under an electron microscope, examining how the catalyst behaves during the entire process by generating nanoscopic-scale images. They used a perovskite-type oxide catalyst called BSCF. “It is an intriguing catalyst with exceptional water-splitting properties,” says Tileli. “Most of the catalysts currently in use, like those made from iridium and ruthenium, are effective but very expensive and their supply is limited. Alternatives will eventually have to be discovered.”

Tileli and Shen captured real-time images of BSCF particles during each step of the electrolysis cycle. They saw molecular oxygen appear, meaning the reaction was taking place, and confirmed that the process was reversible. They also saw that BSCF is particularly robust.

Surfaces that switch from hydrophobic to hydrophilic

In addition, the research team found that the particles’ surface atoms redistribute during the reaction, changing the surface properties. As a result, the particles interact with their surroundings differently at various steps in the electrolysis cycle. The surface is hydrophobic (i.e., water-repellent) during some steps, while during others it’s hydrophilic (i.e., attracted water). “These observations are unique,” says Tileli. “We suspected that the particle surface might be changing, but this had never before been observed at the nanoscopic scale and in real time.” The ability of a material to switch back and forth between the hydrophobic and hydrophilic states is highly valuable to engineers and can be used in a variety of applications, such as sensors, water purification systems, and self-cleaning surfaces. The scientists’ findings are published in Nature Catalysis.”