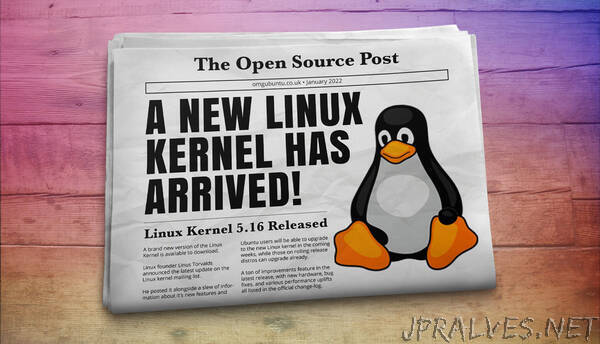 “The Linux Kernel just received its major update of the year — and if you’re a gamer, it’s a corker!

Linus Torvalds announced the availability of Linux kernel 5.16 exactly where he always announces it: the Linux kernel mailing list.

The Linux 5.16 release was delayed by week or so due to the appearance of a red-suited bearded fellow, something Torvalds notes in his announcement where he quips: “we had that extra week due to the holidays, and it’s not like we had lots of last-minute things that needed to be sorted out”.

Contributed by Collabora, this feature could help improve the Linux gaming experience for native Linux port but, more pointedly, for Windows games running via Wine. It lets games wait for multiple ‘futexes’ with a single system call, which should help to reduce CPU utilisation and increase FPS for many games.

Additionally, file system health reporting gets a boost thanks to a new API based on fanotify, though Kernel Newbies note that this only supports the EXT4 filesystem at present. This tweak improves system health monitoring daemons by only reporting to them the first error to occur since the last error notification, and then keeping a count of additional errors.

Each kernel update improves graphics support, and 5.16 is no exception, offering DisplayPort 2.0 to the AMD GPU driver ahead of next-gen cards touting it; further groundwork for DG2/Alchemist graphics and, related, ‘stable’ support for Intel Alder Lake S graphics (i.e. DG1).

The side buttons of the Xiaomi Mi wireless mouse should now work as intended, as should the DualSense LED on Playstation 5 controllers (a full driver was added in Linux 5.12). Also getting an improved out-of-the-box experience are Wacom’s latest Intuos tablets and the Nitrokey FIDO U2F.

Getting Linux 5.16
Linux 5.16 is free, open source software. You can download the latest release from the official kernel.org website.

Rolling release distros (as well as those with more rapid kernel release programmes, like Pop!_OS) will release Linux 5.16 as an update in the coming days.

Fixed release distros like Ubuntu, differ. They don’t usually package every kernel release up. Most do offer a way to install mainline kernels easily, but this is without any sort of official support or stability assurance — i.e. it’s not recommended.”