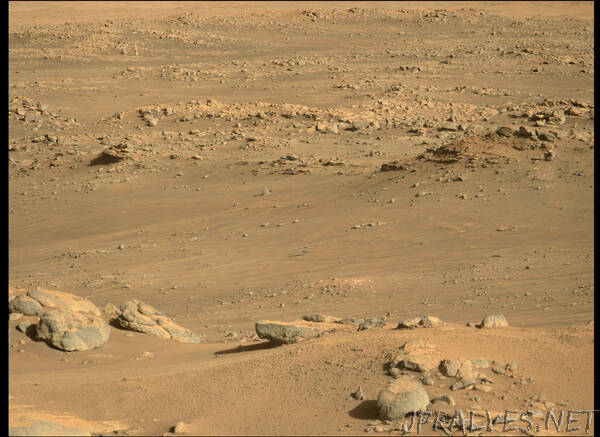 “With its recent 17th flight, the Red Planet rotorcraft reaches an airborne milestone the team never considered achievable. Its 18th flight is scheduled for no earlier than today.

The 17th flight of NASA’s Ingenuity Mars Helicopter on Dec. 5 pushed the total flight time past the 30-minute mark. The 117-second sortie brought history’s first aircraft to operate from the surface of another world closer to its original airfield, “Wright Brothers Field,” where it will await the arrival of the agency’s Perseverance Mars rover, currently exploring “South Séítah” region of Mars’ Jezero Crater.

Along with accumulating 30 minutes and 48 seconds of flight time, the trailblazing helicopter has traveled over the surface a distance of 2.2 miles (3,592 meters), flying as high as 40 feet (12 meters) and as fast as 10 mph (5 meters per second).

The rotorcraft’s status after the Dec. 5 flight was previously unconfirmed due to an unexpected cutoff to the in-flight data stream as the helicopter descended toward the surface at the conclusion of its flight. Perseverance serves as the helicopter’s communications base station with controllers on Earth. A handful of data radio packets the rover received later suggested a healthy helicopter on the surface but did not provide enough information for the team to declare a flight success.

But data downlinked to mission engineers at NASA’s Jet Propulsion Laboratory in Southern California on Friday, Dec. 10, indicates that Flight 17 was a success and that Ingenuity is in excellent condition.

The 30-minute mark far surpasses the original plans for the 4-pound (1.8-kilogram) rotorcraft. Designed as a technology demonstration to perform up to five experimental test flights, Ingenuity first flew on April 19, 2021, with a short up-and-down hop to prove powered, controlled flight on Mars was possible. The next four experimental flights expanded the rotorcraft’s flight envelope, making increasingly longer flights with more complicated maneuvering, which further helped engineers at JPL better understand its performance.

With the sixth flight, the helicopter embarked on a new operations demonstration phase, investigating how aerial scouting and other functions could benefit future exploration of Mars and other worlds. In this new chapter, the helicopter has operated from airfields well south of Wright Brothers Field, scouting rocky outcrops and other geologic features of interest to the Perseverance rover’s science team.

“Few thought we would make it to flight one, fewer still to five. And no one thought we would make it this far,” said Ingenuity Team Lead Teddy Tzanetos of JPL. “On the way to accumulating over a half-hour aloft Ingenuity has survived eight months of bitter cold, and operated out of nine unique Martian airfields. The aircraft’s continued operations speaks to the robustness the design and the diligence and passion of our small operations team.”

Flight 18 is scheduled to take place no earlier than today, Dec. 15, with Ingenuity covering another 754 feet (230 meters) at a speed of 5.6 mph (2.5 meters per second) over 125 seconds. The new airfield, close to the northern boundary of Séítah, will be the rotorcraft’s 10th on Mars. Data from the flight is expected to be received at JPL no earlier than in the late afternoon today.

As with the previous effort, Flight 18 will push the limits of Ingenuity’s radio range and performance. To provide it with the best chance of maintaining a link throughout landing, the Mars Helicopter team has modified the flight sequence to communicate in a low-data-rate mode, which will provide an additional signal-strength boost to the radio link.

“If we do lose radio link on landing, it may be several days or weeks until the line-of-sight between Ingenuity and Perseverance improves enough to attempt a communication session,” said Tzanetos. “While delaying our post-flight data analysis is an inconvenience, it is not unexpected and becoming the new normal as we continue to operate in challenging terrain in the weeks ahead.””