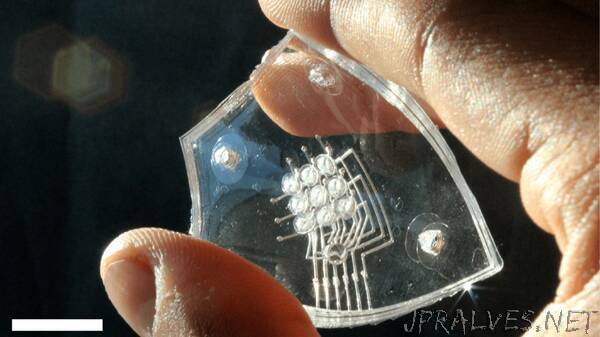 “Imagine an iPad or a Kindle for the blind, with inflatable braille that changes shape under a user’s touch. A Cornell-led collaboration has made a crucial component for such a technology: a haptic array of densely packed actuators that cause silicone membrane “dots” to pop up when triggered by combustion.

One of the major hurdles for designing a dynamic braille display for electronics is figuring out how to apply the necessary amount of force for each dot. Previous attempts have usually involved motors, hydraulics or tethered pumps, all of which are cumbersome, complex and expensive, according to Rob Shepherd, associate professor of mechanical and aerospace engineering in the College of Engineering and the paper’s senior author.

“Having something that can change its shape in a way you can feel, like real objects, doesn’t exist right now. There’s this tradeoff between having small actuators, and size and weight and cost. It’s so difficult,” Shepherd said. “Everybody’s been trying electromechanical systems. So we said, well, what if we don’t do that at all and we use combustion. Small volumes of gas can create powerful outputs.”

The Cornell team collaborated with researchers from Technion-Israel Institute of Technology to design a system, composed primarily of molded silicone and microfluidic liquid metal traces, in which liquid metal electrodes cause a spark to ignite a microscale volume of premixed methane and oxygen. In their array design, this fuel flows through a series of independent channels, each leading to a 3-millimeter-wide actuator. The rapid combustion forces a thin silicone membrane at each site to inflate several millimeters. A magnetic latching system gives these dots their persistent form, and the whole system can be reset simply by pressing them down.

Because there is no need for electromechanical valves, the actuators can be packed more densely together, resulting in a smaller, potentially portable system that still manages to produce large displacements at high force in under 1 millisecond. And since the fluidic elastomer actuators cool quickly, and so little fuel is required, a commercial version could be safely operated.

The technology is also stretchable and conformable, and the researchers anticipate it could be incorporated into a range of applications, such as soft robots and wearable virtual reality equipment that simulates artificial touch. The biocompatible components could also be used for surgical tools that manipulate tissue or open blocked passageways in medical patients.

The current system consists of nine fluidic elastomer actuators, but the researchers are hoping to scale that up and eventually create a full electronic tactile display.

“For the past 30 years or more, people have been trying to pack actuators in an array really closely together,” Heisser said. “Touch, in a way, is more intimate to us than sight. The technology has real potential. I think our work shows there’s more ways of thinking about this. Chemical actuation is really not something to be ignored.”

The research was supported by the National Science Foundation, the Air Force Office of Scientific Research and the Sloan Foundation.

The team had many of their components fabricated by the Laboratory of Atomic and Solid State Physics (LASSP) Professional Machine Shop.”