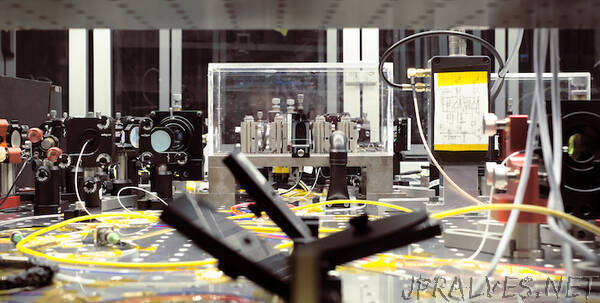 “In a new groundbreaking work, researchers from DTU have now realized the complete platform for an optical quantum computer. The platform is universal and scalable, it all takes place at room temperature, and the technology is directly compatible with standard fibre optic networks. This puts DTU right at the forefront of the development.
Optical quantum computers have long been overshadowed by superconducting technologies that have been accelerated by huge development programmes run at tech giants like IBM and Google. The situation is now changing, one reason being a string of pioneering projects performed by researchers at the basic research centre bigQ at DTU Physics.

Can run any arbitrary algorithm
Although the type of quantum computer that the DTU researchers are developing is conceptually very different from a normal computer, there are also similarities.

There are some basic logical devices (qubits) that carry the information, and there are gates that perform operations on one or more qubits, thus implementing an algorithm.
The demonstration of a so-called universal gate set—and the implementation of a number of operations by means thereof—is precisely what constitutes the new advance in optical quantum computing.

“Our demonstration of a universal set of gates is absolutely crucial. It means that any arbitrary algorithm can be realized on our platform given the right inputs, namely optical qubits. The computer is fully programmable,” says Mikkel Vilsbøll Larsen, who has been the main driving force behind the work and who recently completed his PhD studies at DTU.

Scaling makes quantum computer practically relevant
The potential of the quantum computer is enormous, and its dramatically increased processing power relative to standard transistor-based computers will enable disruptive innovation in a wide range of areas of great importance to Denmark, such as the pharmaceutical industry, optimization of the transport sector, and development of materials for carbon capture and storage.

A crucial factor in fulfilling this potential is that the quantum computer is realized on a platform that is scalable to thousands of qubits, explains Senior Researcher Jonas S. Neergaard-Nielsen, who is one of the mainstays of the work.

“Theoretically, there’s no difference between whether a quantum computer is based on superconducting or optical qubits. But there’s a decisive practical difference. Superconducting quantum computers are limited to the number of qubits fabricated on the specific processor chip. In our system, we’re constantly creating new ones and entangling them quantum mechanically with those we are performing calculations on. This means that our platform is easily scalable.”

“In addition, we don’t need to cool everything down in large cryostats. Instead, we can do it all at room temperature in optical fibres. The fact that the system is based on optical fibres also means that it can be connected directly to a future quantum Internet, without difficult intermediaries.”

The researchers passed the scaling milestone already back in 2019 when — in an article in Science — they accounted for how, as some of the first in the world, they had produced the basic structure for a measurement-based optical quantum computer—a so-called two-dimensional cluster state with over 30,000 entangled light states.

Already looking determinedly ahead
Although they might be tempted to rest on their laurels for just a while, the team of researchers already have new goals in their sight.

Earlier this year, they developed and patented a full theoretical framework for how their technology can also embrace error correction in the long term. This is one of the great current challenges for quantum computing technology.

“It’s an important research result we’ve just published, and we’re proud of it. But our ambitions go much further than that. The long-term goal is a quantum computer that can solve relevant problems and fulfil the potential we’re all striving towards,” says Professor Ulrik L. Andersen, who is head of bigQ and has supervised the whole research programme.

“We know what it takes to place our current technology on an optical chip and introduce error correction, and we have the relevant international collaborations in place. The same applies to the corporate sector, where companies are eager to develop use cases with us.”

In other words, the researchers at DTU are ready for the next challenges and to take the next step from basic research to innovation. In fact, funding is the only thing missing.”