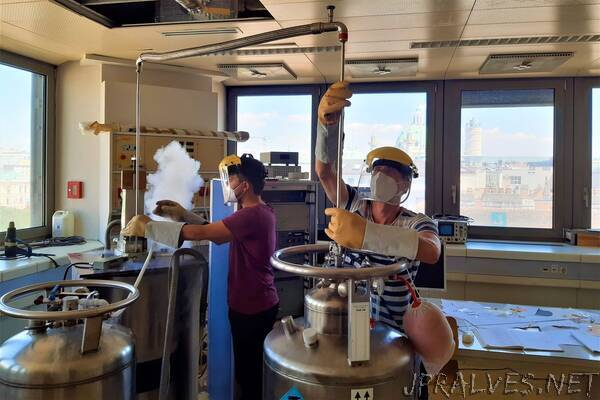 “How reproducible are measurements in solid-state physics? New measurements show: An allegedly sensational effect does not exist at all.

A single measurement result is not a proof - this has been shown again and again in science. We can only really rely on a research result when it has been measured several times, preferably by different research teams, in slightly different ways. In this way, errors can usually be detected sooner or later.

However, a new study by Prof. Andrej Pustogow from the Institute of Solid State Physics at TU Wien together with other international research teams shows that this can sometimes take quite a long time. The investigation of strontium ruthenate, a material that plays an important role in unconventional superconductivity, has now disproved an experiment that gained fame in the 1990s: it was believed that a novel form of superconductivity had been discovered. As it now turns out, however, the material behaves very similarly to other well-known high-temperature superconductors. Nevertheless, this is an important step forward for research.

Two particles with coupled spin
Superconductivity is one of the great mysteries of solid-state physics: certain materials lose their electrical resistance completely at low temperatures. This effect is still not fully understood. What is certain, however, is that so-called “Cooper pairs” play a central role in superconductivity.

In a normal metal, electric current consists of individual electrons that collide with each other and with the metal atoms. In a superconductor, the electrons move in pairs. “This changes the situation dramatically,” explains Andrej Pustogow. “It’s similar to the difference between a crowd in a busy shopping street and the seemingly effortless motion of a dancing couple on the dance floor.” When electrons are bound in Cooper pairs, they do not lose energy through scattering and move through the material without any disturbance. The crucial question is: Which conditions lead to this formation of Cooper pairs?

“From a quantum physics point of view, the important thing is the spin of these two electrons,” says Andrej Pustogow. The spin is the magnetic moment of an electron and can point either ‘up’ or ‘down’. In Cooper pairs, however, a coupling occurs: in a ‘singlet’ state, the spin of one electron points upwards and that of the other electron points downwards. The magnetic moments cancel each other out and the total spin of the pair is always zero.

However, this rule, which almost all superconductors follow, seemed to be broken by the Cooper pairs in strontium ruthenate (Sr2RuO4). In 1998, results were published that indicated Cooper pairs in which the spins of both electrons point in the same direction (then it is a so-called “spin triplet”). “This would enable completely new applications,” explains Andrej Pustogow. “Such triplet Cooper pairs would then no longer have a total spin of zero. This would allow them to be manipulated with magnetic fields and used to transport information without loss, which would be interesting for spintronics and possible quantum computers.”

This caused quite a stir, not least because strontium ruthenate was also considered a particularly important material for superconductivity research for other reasons: its crystal structure is identical to that of cuprates, which exhibit high-temperature superconductivity. While the latter are deliberately doped with “impurities” to make superconductivity possible, Sr2RuO4 is already superconducting in its pure form.

New measurement, new result
“Actually, we studied this material for a completely different reason,” says Andrej Pustogow. “But in the process, we realised that these old measurements could not be correct.” In 2019, the international team was able to show that the supposedly exotic spin effect was just a measurement artefact: the measured temperature did not match the actual temperature of the sample studied; in fact, the sample studied at the time was not superconducting at all. With this realisation in mind, the superconductivity of the material was now re-examined with great precision. The new results clearly show that strontium ruthenate is not a triplet superconductor. Rather, the properties correspond to what is already known from cuprates.

However, Andrej Pustogow does not find this disappointing: “It is a result that brings our understanding of high-temperature superconductivity in these materials another step forward. The finding that strontium ruthenate shows similar behaviour to cuprates means two things: On the one hand, it shows that we are not dealing with an exotic, new phenomenon, and on the other hand it also means that we have a new material at our disposal, in which we can investigate already known phenomena.” Ultra-pure strontium ruthenate is better suited for this than previously known materials. It offers a much cleaner test field than cuprates.

In addition, one also learns something about the reliability of old, generally accepted publications: “Actually, one might think that results in solid-state physics can hardly be wrong,” says Pustogow. “While in medicine you might have to be satisfied with a few laboratory mice or a sample of a thousand test subjects, we examine billions of billions (about 10 to the power of 19) electrons in a single crystal. This increases the reliability of our results. But that does not mean that every result is completely correct. As everywhere in science, reproducing previous results is indispensable in our field - and so is falsifying them.”