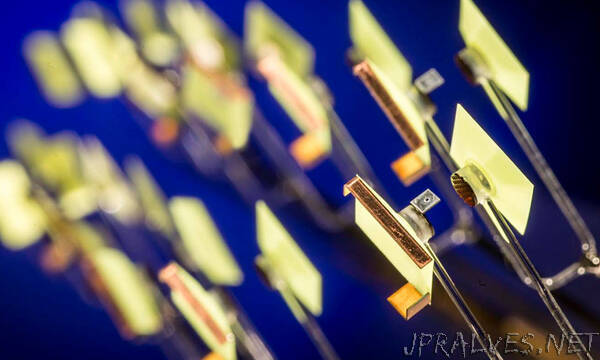 “Researchers at the Laboratory for Laser Energetics are the first to experimentally measure the mechanism responsible for generating astrophysical magnetic fields.
An international research collaboration, co-led by researchers at the University of Rochester’s Laboratory for Laser Energetics (LLE) and the University of Oxford, has captured for the first time in a laboratory setting the process thought to be responsible for generating and sustaining astrophysical magnetic fields.

Publishing their results in the Proceedings of the National Academy of Sciences, the team reports the findings could help explain the origin of large-scale magnetic fields that have been observed but didn’t match theoretical calculations.

The work is the latest to refine further scientists’ understanding of a once-elusive phenomenon known as a “turbulent dynamo,” an astrophysical process that amplifies magnetic fields. By creating experimental conditions that mimic most hot, diffuse plasmas in the universe—conditions in which the turbulent dynamo mechanism is thought to operate—the team was able to quantify the rate at which a turbulent dynamo amplifies magnetic fields. Up until now, the rate had only been predicted theoretically and via numerical simulations.

“The rapid amplification we found exceeds theoretical expectations and could help explain the origin of the present-day large-scale fields that are observed in galaxy clusters,” says Petros Tzeferacos, an associate professor of physics and astronomy at Rochester and a senior scientist at the LLE.

The researchers—part of the Turbulent Dynamo (TDYNO) team—conducted their experimental research at the LLE’s Omega Laser Facility, where they had previously demonstrated experimentally the existence of the turbulent dynamo mechanism. That breakthrough earned the team the 2019 John Dawson Award for Excellence in Plasma Physics Research from the American Physical Society.

Using laser beams whose total power is equivalent to that of 10,000 nuclear reactors, the researchers were able to study plasma at energy levels that previous liquid-metal and laser-driven experiments could not.

“Understanding how and at what rates magnetic fields are amplified at macroscopic scales in astrophysical turbulence is key for explaining the magnetic fields seen in galaxy clusters, the largest structures in the universe,” says Archie Bott, a postdoctoral research associate in the Department of Astrophysical Sciences at Princeton and lead author of the study. “While numerical models and theory predict fast turbulent dynamo amplification at very small scales compared to turbulent motions, it had remained uncertain as to whether the mechanism operates rapidly enough to account for dynamically significantly fields on the largest scales.”

The experiments demonstrated that turbulent dynamo—when operating in a realistic plasma—can generate large-scale magnetic fields much more rapidly than currently expected by theorists.

“Our theoretical understanding of the workings of turbulent dynamo has grown continuously for over half a century,” says Gianluca Gregori, professor of physics at the University of Oxford and the experimental lead of the project. “Our recent laser-driven experiments were able to address for the first time how turbulent dynamo evolves in time, enabling us to experimentally measure its actual growth rate.”

The experiments were designed using numerical simulations performed with the FLASH code, a publicly available simulation code that can accurately model laser-driven experiments of laboratory plasmas. FLASH is developed by the Flash Center for Computational Science, which recently moved from the University of Chicago to the University of Rochester.

“The ability to do high-fidelity, predictive modeling with FLASH, and the state-of-the art diagnostic capabilities of the Omega Laser Facility at the LLE, have put our team in a unique position to decisively advance our understanding of how cosmic magnetic fields come to be,” says Tzeferacos, who also serves as director of the Flash Center at Rochester.