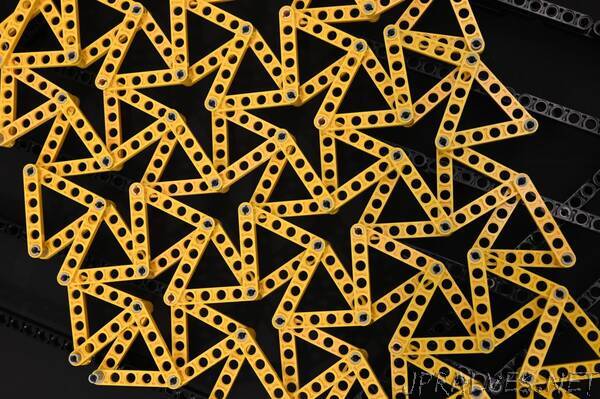 “UChicago scientists see opportunities for ‘metamaterials’ designed using dualities
When you knock on a melon to see if it’s ripe, you are using sound waves to probe the structure of the material inside. Physicists at the University of Chicago were using the same concept to explore how sound waves travel through patterned structures when they noticed an oddity: completely different structures sounded the same.

This was a surprising thing—sort of like knocking on a melon and a pineapple, and discovering they both made the same sound.

“What got us excited was that we could not explain our findings using existing concepts, such as spatial symmetries,” said Vincenzo Vitelli, a professor of physics in the James Franck Institute.

What Vitelli and his group had discovered was a duality, a ‘hidden’ symmetry linking apparently unrelated systems. Published in Nature, their study could one day help to design metamaterials or even microscopic devices that process information encoded in sound waves.

Over the years, physics has built up a framework to predict the properties of an object based on its spatial symmetries. “Look at a plastic model of a methane molecule: its hydrogen atoms form a regular tetrahedron. This tells you a lot about how the molecule vibrates,” said Michel Fruchart, a postdoctoral researcher and first author of the paper. In a similar vein, LEGO models helped the authors of this study to discover their dualities. (A video demonstration is available at their site.)

What if these dualities could be exploited to endow a material with properties that it would not otherwise have?

In the past few years, there has been an explosion of interest in a field called metamaterials. These are artificial structures engineered to have characteristics not normally expected in nature. For example, much thought has gone into realizing an ‘invisibility cloak’ using composite materials that bend incoming light around them by virtue of their internal geometry.

Fruchart and Vitelli imagined using this approach to take a particle such as a phonon—essentially a particle of heat—and give it properties that it doesn’t usually have.

They hope that dualities could prove just as important in designing metamaterials as symmetries currently are.

Electrons have a property called “spin” that is used as a basis for some of the latest high-tech electronics. Phonons don’t have a spin, but if scientists could shape the structure of materials to give phonons a “fake spin”, they could potentially use them in phononic devices—similar to electronics, but with different abilities, such as heat control.

“By moving the phonons around, one could process the information stored in their pseudo-spin,” Vitelli said.

They termed this concept “mechanical spintronics.” The scientists said they hope that dualities could prove just as important in designing metamaterials as symmetries currently are.