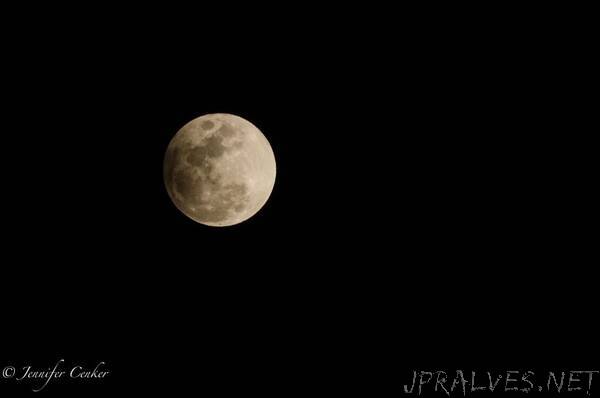 “Next time you’re outside on a bright, sunny day, take note that the shadow you’re casting does not have a sharp edge. In fact, a diffuse penumbra surrounds most any shadow, unless the light is a point source.

A penumbral lunar eclipse is scheduled for Friday (Jan. 10). No part of the moon enters Earth’s much darker umbra, as happens during a partial or total lunar eclipse. But on Jan 10-11 (depending on your location), just about the best penumbral eclipse possible will occur.

The lower portion of the moon will track deep into the Earth’s outer shadow, and the natural satellite’s southern limb will miss the Earth’s umbra by only about 225 miles (360 kilometers), or nearly 10% of the moon’s diameter. Although none of the moon will go dark, the penumbral shading will be very plain to see.

Unfortunately, the eclipse will not be visible from most of North America, where the darkest phase will happen during the late morning to early afternoon hours, when the full moon will be out of sight below the horizon.

To get a good view of this eclipse, you would have to be located somewhere in the Eastern Hemisphere: Europe, Africa and western Asia will have a trouble-free view, with the moon ascending the east-northeast sky. Some small parts of North America — like Newfoundland, northern Canada and Greenland — will have a chance to see the end of eclipse, which begins before moonrise.

If you’re not in the right place to see the eclipse, or if cloudy skies foil your view, you can watch the event live online. The Slooh community observatory will provide a webcast starting at 2:30 p.m. EST (1930 GMT), which you can watch live here on Space.com, courtesy of Slooh. Additionally, The Virtual Telescope Project will stream live views of the eclipse from Rome, beginning at 12 p.m. EST (1700 GMT).

A shady little drama
The outer part of Earth’s penumbra, like the outer part of any penumbra, is so weak that it’s difficult to spot from a great distance, such as when it’s on the moon’s surface. Even the sharpest of eyes will fail to detect anything happening until the moon’s edge is at least halfway across the penumbra. For this event, that means about 65 minutes before mid-eclipse (which will come at 12:10 p.m. EST, or 1910 GMT).

Shading will begin on the left side of the moon. For some minutes around the time of mid-eclipse, the lower part of the moon will appear noticeably “smudged” or “soiled.” The lopsidedness of the moon’s illumination will be obvious. Compared to the Earth’s umbra, which appears much darker and with a sharper edge, the penumbra appears more as a diffuse shading on the lunar disk. But that shading will become ever more sharply concentrated toward the southern limb.

After mid-eclipse, the process reverses. The last evidence of any shading should disappear about an hour later, with the moon reverting back to its normal self.”