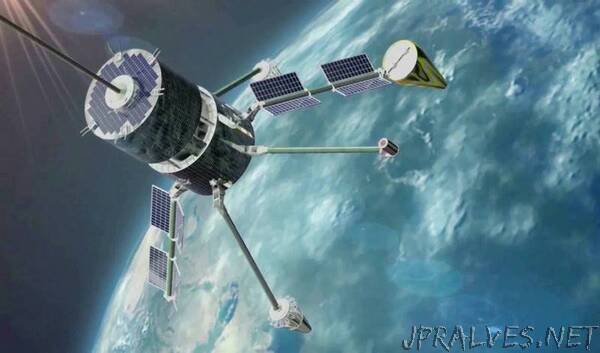 “Passengers aboard the last Rockot mission

The primary payload of the Rockot mission is the 15th group of three Gonets-M low-orbital communications satellites. They received official production numbers No. 24, 25 and 26. The same launch was also expected to deliver a pair of polished glass spheres called Blits-M which are used as laser reflectors in high-accuracy gravitational studies, even though only one actually made it onboard the rocket. The Blits series was developed at SPP, a Roskosmos enterprise specialized in guidance and tracking systems for the military and space industry. In addition, the Radio-2017 experimental satellite was originally planned to piggy-back on the same rocket, but was not ultimately included into the payload.

The 15th Gonets-M mission was originally expected to lift off as early as the Fall of 2016, just a year and a half after the previous trio of Gonets satellites was orbited in March 2015. ISS Reshetnev in Zheleznogorsk completed the construction of the final satellite for the fresh Gonets trio in July 2016.

However, after the annexation of Crimea in 2014, supplies of the Ukrainian-built flight control system for the Rockot came into question. The possibility of moving Gonets missions from Rockot to Soyuz-2-1v were apparently considered but ruled out. Eventually, the Russian industry was apparently able to secure a limited number of Ukrainian flight control units and spare parts for the Rockot, thanks to mediation by the Europeans, who needed Rockot for their own payloads, such as Sentinel satellites. However, along with the hardware, the Russian military, operating Rockot in Plesetsk, likely needed help from Ukrainian specialists to prepare the vehicles for launch. While such assistance could be arranged for European missions, it could be much harder to do for exclusively Russian missions.

At last, in September 2019, the delivery of the Gonets satellite trio from ISS Reshetnev to Plesetsk was finally promised for October and the launch for the end of November 2019. However, by the beginning of that month, the launch was postponed until the end of December 2019.

On November 11, 2019, GKNPTs Khrunichev announced that a Briz-KM upper stage, a payload fairing and an adapter had been delivered to Plesetsk for an upcoming launch with multiple spacecraft, clearly referring to the 15th Gonets-M mission.

At the beginning of December, the launch was set for the 27th of that month.

On December 19 and 22, 2019, Russian authorities issued warning to sea and air traffic to avoid three areas in the Barents Sea and the East-Siberian Sea, where fragments of the booster were expected to fall. The launch window, according to the notifications, extended from 22:30 to 23:59 UTC and from 01:30 to 02:59 UTC on December 26, 27, and 28.

Typically for Gonets launches, the rocket headed northeast separating its first stage around two minutes after liftoff at an altitude of around 70 kilometers. The spent booster then fell into the Barents Sea, west of the Novaya Zemlya archipelago. The payload fairing, protecting the payload, split in two halves and separated 40 seconds into the operation of the second stage at an altitude of 120 kilometers, beyond any discernable air pressure.

The second stage was to fire until five minutes into the flight, lifting its cargo to around 250 kilometers into space, before separating and splashing down in the Arctic Ocean, northeast of the Novosibirsk Islands.

Several minutes after the planned separation of the second stage, the official Russian media, quoting the Ministry of Defense, confirmed that ground assets of the Titov Chief Test Center of the Space Forces began tracking the vehicle at 02:14 Moscow Time. The Russian military also confirmed that the payload section had separated from the upper stage as planned at 02:17 Moscow Time.

Around four seconds after separation from the second stage, the Briz-KM upper stage was expected to fire its own engine for about nine minutes in order to reach a 160 by 1,479-kilometer transfer orbit with an inclination 82.5 degrees toward the Equator. The vehicle would then be in passive ascent along its egg-shaped orbit. After the stack reaches the highest point of the transfer orbit around an hour later, the Briz-KM should re-start its engine for about a minute, forming the target circular orbit of the mission at an altitude of 1,500 kilometers above the Earth surface and extending from the South Pole to the North Pole of the planet. Gonets satellites are usually scheduled to separate from the upper stage one hour, 50 minutes after launch. 11 minutes later, Briz-KM is normally programmed to fire its engine for less than two minutes to perform a payload avoidance maneuver.”