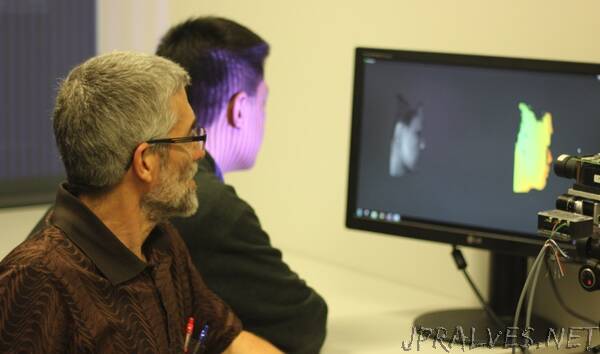 “Researchers have created a new scanner that can improve everything from surgical procedures to our understanding of landslides.

The new scanning technology, created by engineering researchers at the University of Waterloo, is able to capture full-field 3D surface-shape data in real time by enabling 3D capabilities at every camera pixel.

The high-resolution technology uses novel algorithms to compute surface shape at the same frame rate as video with a measurement accuracy of approximately 0.1 mm and can capture images of moving or static objects.

“We’ve been able to measure the shape of a surface in real-time, whether it’s a rigid or a deforming surface,” said Jonathan Kofman, director of the University’s Intelligent Human-Machine Systems and 3D Imaging Laboratories.

The scanner, described by Kofman as a 3D video camera, can be mounted on a tripod or robot, or be hand-held. Used during surgery, it can take real-time measurements of an organ or tissues that may have shifted or changed shape since images were taken before the operation began.

“If you’re looking at tissues, you can measure their surface coordinates while the shape is changing,” said Kofman.

During brain surgery, part of the skull may be removed exposing the brain, which changes shape during the operation. Since preoperative MRI images will no longer be accurate, it’s critical to have up-to-date measurements for the surgical procedure.

“The surgeon operating a robotic system may now see an overlay of the 3D shape of tissues,” said Kofman. “They can rotate the shape and look at it from different viewpoints.”

Other medical applications of the Waterloo researchers’ 3D scanner include monitoring the progress of treatment of conditions of facial deformity, where muscles on part of the face become weak or paralyzed.

The system’s ability to provide 3D measurements of deforming surfaces could also help with the analysis of ground movement such as landslides and mudslides.

The Waterloo researchers have developed a working prototype for their technology and are seeking an industry partner to help commercialize it.

Kofman and Liu recently published their findings in the publications Optics Express and Optics and Lasers in Engineering.”