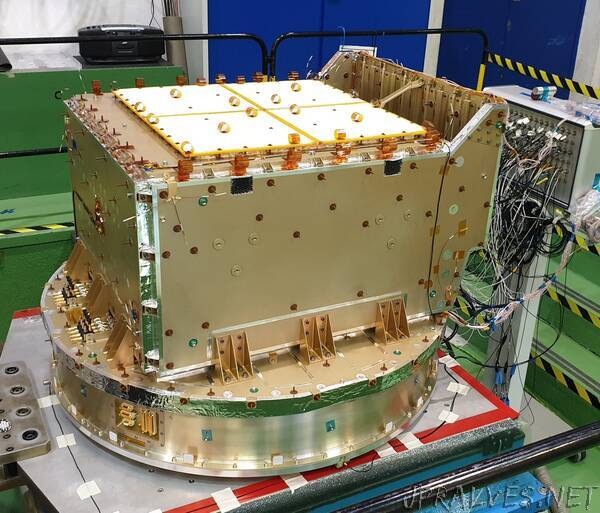 “Airbus, ESA and Eutelsat have presented the new ground breaking multibeam active antenna payload today at Airbus in Madrid. Airbus’ ELSA+ (ELectronically Steerable Antenna+) is a first for commercial satellite communications in Europe. The versatility of its performance represents a step change for communications satellites with a spacecraft able for the first time to adapt to the customers’ business cases as and when needed by means of software control.

The electronically steerable reception antenna, works in Ku-band with eight independent reconfigurable beams. This inherent flexibility enables the operator to reconfigure the radio frequency beams over the coverage zone, allowing for an unprecedented flexibility in multimedia and broadcasting services.

In addition, these capabilities can be implemented on each beam either independently or simultaneously including hop up to several tens of predefined different configurations per beam (beam hopping).

Another new feature is the capability of the antenna to mitigate possible interference, intended or not, thanks to its ability to GEO locate any interference and null them.

This new antenna technology complements new generation fully digital payloads where the operator can thus change the orbit position, frequencies and the power of their spacecraft.

Airbus Defence and Space in Spain is the prime contractor for this advanced instrument developed over four years. Airbus led an industrial group that included a group of 12 European companies, eight of them Spanish, to build this advanced system.

Innovative design and manufacture of active antennas is one of the Airbus strengths in Spain. ELSA+ builds on previous developments such as: the DRA/ELSA for Hispasat 36W1, IRMA (In-orbit Reconfigurable Multibeam Antenna) on board SpainSAT for secure military communications, as well as the Gaia active antenna that transmits large amounts of data as the spacecraft maps a billion stars. These systems are all operating successfully in orbit.

“With ELSA+ we are entering a whole new game in satellite telecommunications, this is just a starting point and a reference for future missions,” said Fernando Varela, Head of Airbus Space Systems in Spain, “we are constantly evolving this technology, and Airbus is already developing the future generation antennas for the SPAINSAT-NG programme.”

This new development for the EUTELSAT QUANTUM satellite positions Airbus in Spain as the leader in Europe for active antennas. The project has been possible thanks to the support of CDTI (Spanish Centro para el Desarrollo Tecnológico Industrial) and the European Space Agency. Quantum is being built under an ARTES Partnership Project between manufacturers Airbus and Surrey Satellite Technology Ltd, operator Eutelsat and ESA. ESA’s Partnership Projects aim to achieve economic impacts and competitive leaps forward federating industry around large-scale programmes.

The mass of the satellite at launch is 3.5 tonnes and its design lifetime is 15 years. The EUTELSAT QUANTUM satellite is due to be launched 2nd half of 2020.”