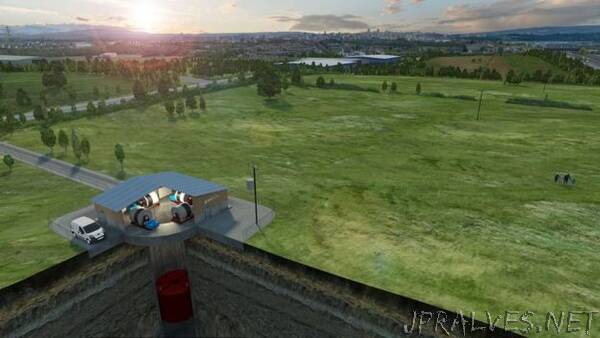 “What goes up must come down, and a vague memory of school physics reminds me that an object that has yet to come down has potential energy in it.

Drop it, and it becomes kinetic energy.

That’s the essence of pump storage in hydro projects. On a steep drop between two reservoirs, use excess power at night to pump water uphill, then release it downhill when you need it.

When the nation’s kettles are switched on at half time in a big football match, the sluices are opened, water hits the turbines, and power is delivered within very few seconds. It’s much faster and greener than firing up a gas boiler.

Winding gear
Norway’s geography has blessed it with a lot of pump storage. The UK’s much less so. There are a few big projects, such as Cruachan, and a couple of sites, including one at the planning stage north of Dumfries, which could be developed.

But with only a few possible sites, and daunting cost when you develop one, a much cheaper application of the same very simple physics is being developed by an Edinburgh company.

Unlike so many incomprehensible techie start-ups, it has chosen a name that describes precisely what it does.

Gravitricity - generating electricity from gravity - is getting noticed by investors, as an effective alternative to large batteries, so that renewable energy supply can be stored until there is demand. No need to go to the Congolese jungle to get hold of the raw materials for batteries.

All you need is a lot of concrete, some very strong cables, and winding gear.

I simplify a bit. The power also has to be harnessed by turbines and then connected to the grid. And you have to build high towers, or find deep holes in the ground.

Gravitricity wants to start with such a tower in Edinburgh, to prove the concept. But it then wants to use mines which are closing, or recently closed, to make use of their deep shafts.

The company is in discussions with mine owners in the UK, South Africa, Finland, Poland and the Czech Republic. The average European mine shaft is 800 metres. In South Africa, it is more than 2,000m.

Blue whales
The scale of the ambition is really quite large. The company reckons on using 24 weights, totalling 12,000 tonnes, stacked in a mine shaft. Depending on demand, they could be released one at a time or in combination, and at different speeds, depending on what is required.

This apparatus, it is pointed out, has the same weight as 84 blue whales (while area is compared with football pitches or the size of Wales, and height with double-deck buses, the comparison with blue whale weight is lost on me, not least because they are rarely seen and unimaginably large. But I digress).

At that scale, the company claims the output from one (average) mineshaft could power 63,000 homes for an hour. The weights could then be recharged when demand is lower, and you do it all over again, without any degradation of capacity.

A UK government agency, Innovate UK, has just pumped a £640,000 grant into the idea. This week, analysts at Imperial College London, predicted that the idea offered a much cheaper form of storage than batteries or other alternatives.

An industrial-scale lithium ion battery Is seen as costing £442 ($532) per Megawatt hour, in investment and charging costs. Air compression is cheaper at £239 ($310). But a lump of concrete in a mineshaft comes in at £132 ($171) for the same “shaving” or gradual release of energy.

The plan is for a working prototype to be operational by 2022.

One thought, though. If it’s as simple a concept as it sounds, it will take a smart lawyer to ensure the intellectual property is protected.”