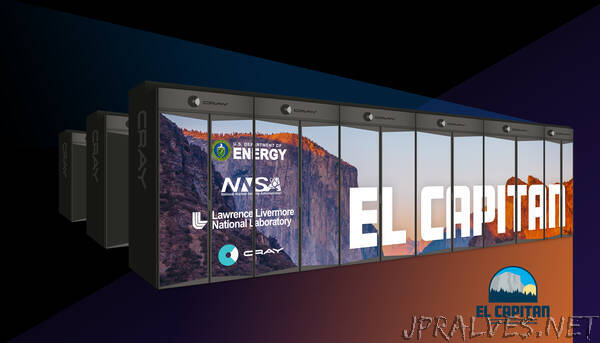 “On August 13 we announced our third contract in six months to deliver an exascale supercomputer to the U.S. Department of Energy. That’s right. Three.

When it comes online in 2023, El Capitan will also join Frontier and Aurora as one of the three fastest systems in the world. It will have a peak performance of 1.5 exaflops — or more than 1.5 quintillion operations per second. A quintillion? Think of it this way…El Capitan could churn out 8 million years’ worth of tweets in a single second.

While it theoretically could rule the Twitterverse, in reality El Capitan will be supporting the National Nuclear Security Administration in its work to make the world safer by providing the ability to leverage AI and machine learning with modeling and simulation workloads.

The tech behind the triple crown
Speaking of numbers starting with 1.5, since announcing our exascale-class Shasta supercomputing architecture in October 2018, we’ve booked $1.5 billion in Shasta systems. For us, it’s a phenomenal — but not surprising — validation of our supercomputing vision.

Our Shasta system is the result of a technological shift we saw coming years ago. Driven by explosive data growth, converging workloads, and the inevitability of digital transformation, organizations started asking new questions. And they needed new capabilities to answer them.

Just speeding up the status quo wasn’t going to do what everyone from small enterprises to national labs would need to do.

So we threw our efforts into rethinking just about every aspect of our supercomputing technology — from hardware to software to interconnect. Based on the market’s response to our solution we got it right. Enter Shasta and the exascale era™. Exascale isn’t just a speed milestone; it a major computing inflection point that will touch how just about every organization approaches discovery.

Shasta hardware innovations allow for processor diversification and eliminate the distinction between clusters and supercomputers. The new Slingshot interconnect is up to the task of today’s datacentric and converged workloads with advanced adaptive routing, first-of-a-kind congestion control, Ethernet capability, and sophisticated quality-of-service capabilities.

Rounding out the El Capitan news — and our exascale-era Shasta technology — is the formal announcement of our entirely new, open, and extensible Shasta software platform. A first of its kind, the Shasta software “performs like a supercomputer and runs like a cloud” by fusing supercomputing capability with the modularity, composability, and ease-of-use of cloud computing.

In short, it’s been a crush of news around here. But if exascale is an era (and we think it is) then Cray is writing the story. Or in the words of one of the press headlines: “Cray Runs the Exascale Table.””