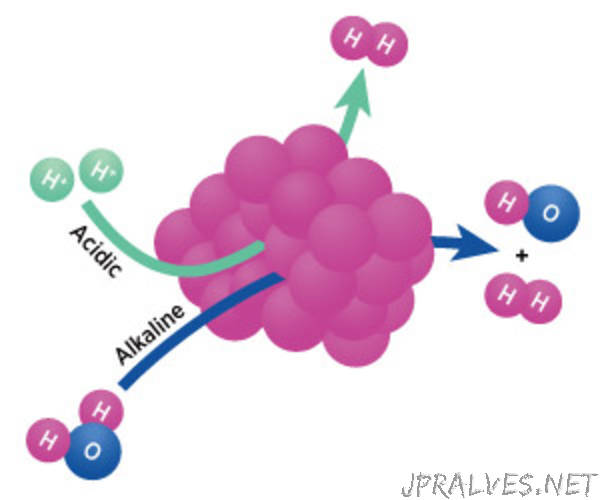 “Cheap and accessible cobalt-based catalysts could fast-track the industrial-scale production of hydrogen from water.

A low-cost and simple alternative to expensive platinum-based catalysts that generate hydrogen from water could soon be available, thanks to A*STAR researchers.

A team from A*STAR’s Institute of Materials Research and Engineering has developed a one-step approach to synthesize cobalt phosphides that exhibit good electrochemical activity in the hydrogen evolution reaction (HER). “Unlike the expensive and scarce platinum-based catalysts, these phosphorus-functionalized cobalt catalysts are particularly promising because of their long-term stability and suitability to large scale industrial implementation,” explains Yun Zong, who led the team with Zhaolin Liu.

Hydrogen is an energy-dense, clean and renewable fuel source that plays a key role in many industrial processes, such as the production of ammonia as well as the processing and refining of fossil fuels. Yet, it is predominantly produced through the steam reforming of natural gas, a high-temperature extraction from hydrocarbons that emits carbon dioxide in large quantities.

Water electrolysis and light-driven water splitting, which isolate hydrogen from water, have emerged as attractive environmentally-friendly alternatives to this process. These electrochemical approaches depend on the slow formation of oxygen at the anode concomitant with the hydrogen evolution reaction at the cathode. However, while hydrogen evolution has proven easier under acidic conditions, electrocatalysts developed to speed up the anodic reaction have shown higher activity in alkaline media. In response to this, the team has devised nanostructured cobalt phosphides that are able to facilitate the hydrogen evolution reaction regardless of the pH of the aqueous media¹.

The researchers have concocted a facile and scalable synthesis that yields catalysts in one step. In this one-step synthesis, a phosphorus-containing compound reacts directly with commercially available cobalt salts when heated to 330 degrees Celsius. This unusual gas−solid ‘phosphidation’ produces a mixture of cobalt-containing compounds, including mono- and bimetallic phosphides, oxides, and trace metal with a small amount of gaseous phosphine.

“Each of these cobaltous species is expected to benefit the overall HER activity,” says Zong, noting that most gas–solid phosphidation reactions only give the monometallic derivative in low yields. He adds that conventional syntheses require multiple steps involving the production of a cobalt precursor and the subsequent phosphide formation.

In addition to integrating their cobalt-base catalysts into a water splitting system, the team is currently working on screening other transition metal salts and optimizing the synthetic procedures. “These protocols may be extended to one-step phosphidation of other transition-metal salts,” says Zong, adding that insight into the direct phosphidation of cobalt salts provides valuable input for the future large-scale synthesis of transition metal phosphides.

The A*STAR-affiliated researchers contributing to this research are from the Institute of Materials Research and Engineering.”