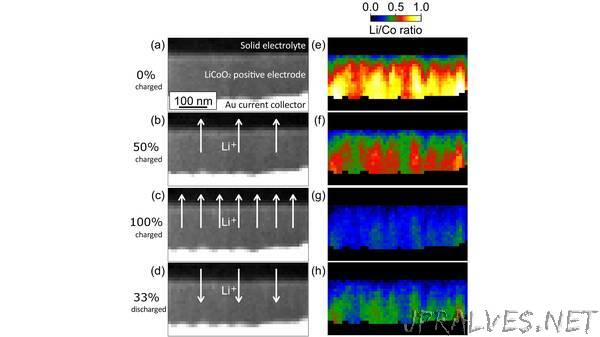 “Panasonic Corporation succeeded in regionally fixed quantitative visualization of the two-dimensional distribution of the lithium ions (hereafter “Li-ions”) in the LiCoO2 cathode for the first time in the world by charging and discharging the all-solid-state lithium ion battery in the scanning transmission electron microscope (STEM) (1) and by using the electron energy-loss spectroscopy (EELS) (2) and the advanced image analysis techniques (multivariate analysis techniques) in collaboration with Japan Fine Ceramics Center and Nagoya University. (See [Fig.].)

Through this observation, it became clear that ununiformly distributed Li in the LiCoO2 cathode had effects also on movement of the Li-ions during the charging and discharging processes. It was also found that the Li-ion concentration was low and lots of Co3O4 coexisted around the interface near the solid electrolyte.
It is hoped that this will make clear the cause of the Li-ions’ high transport resistance at the interface and lead to a big step toward commercialization of the next-generation batteries.
This achievement was reported in the online edition of the journal “Nano Letters” on August 21, 2018.
This study was conducted supported by the Japan Society for the Promotion of Science’s Grants-in-Aid for Scientific Research (JP 17H02792) and the Ministry of Education, Culture, Sports, Science and Technology’s Nanotechnology Platform Program (Nagoya University).

1. Background
Research and development of the all-solid-state Li-ion batteries that can be expected to realize high safety and high energy density are being conducted around the world as one of the “innovative batteries” that can solve the issues of the conventional batteries using the liquid electrolyte for the purpose of their future installation on the electric automobiles and the hybrid cars. However, the Li-ions’ very high transport resistance at the interface between the electrode and the solid electrolyte is preventing commercialization of all-solid-state Li-ion batteries.

What is necessary to solve the issue and design and develop the high-performance all-solid-state batteries is visualizing the movement of the Li-ions in the batteries and feeding back into the battery designing. However, because of the batteries’ reactions generated locoregionally in the nanometer (one-billionth of a meter) scale and low detection sensitivity of Li, a light element, the nanoscale movement of the Li-ions during the charging and discharging processes could not have been visualized.

By using this new Li imaging technique, the Li distribution inside the LiCoO2 cathode and the valence distribution of the transition element Co were monitored two-dimensionally while charging and discharging the all-solid-state Li-ion battery consisting of the LiCoO2 cathode, the LASGTP solid electrolyte (4) and the in-situ formed negative electrode (5). The technique enabled capturing clearly the Li-ions’ extraction and insertion according to the battery’s charging and discharging and it became clear as a result of the advanced image analysis that co-existence of lots of Co3O4 near the interface between the LiCoO2 cathode and the LASGTP solid electrolyte was preventing smooth movement of the Li-ions.