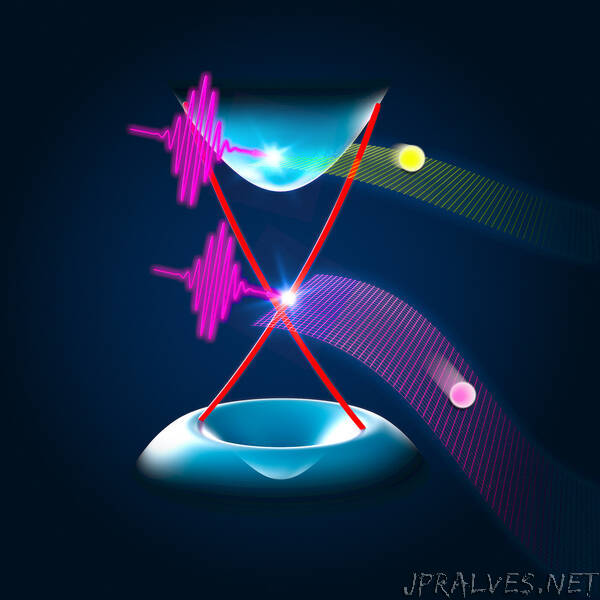 “New study elucidates fundamental enigma of topological insulators
They are regarded as one of the most interesting materials for future electronics: Topological insulators conduct electricity in a special way and hold the promise of novel circuits and faster mobile communications. Under the leadership of the Helmholtz-Zentrum Dresden-Rossendorf (HZDR), a research team from Germany, Spain and Russia has now unravelled a fundamental property of this new class of materials: How exactly do the electrons in the material respond when they are “startled” by short pulses of so-called terahertz radiation? The results are not just significant for our basic understanding of this novel quantum material, but could herald faster mobile data communication or high-sensitivity detector systems for exploring distant worlds in years to come, the team reports in NPJ Quantum Materials (DOI: 10.1038/s41535-021-00384-9).

Topological insulators are a very recent class of materials which have a special quantum property: on their surface they can conduct electricity almost loss-free while their interior functions as an insulator – no current can flow there. Looking to the future, this opens up interesting prospects: Topological insulators could form the basis for high efficiency electronic components, which makes them an interesting research field for physicists.

But a number of fundamental questions are still unanswered. What happens, for example, when you give the electrons in the material a “nudge” using specific electromagnetic waves – so-called terahertz radiation – thus generating an excited state? One thing is clear: the electrons want to rid themselves of the energy boost forced upon them as quickly as possible, such as by heating up the crystal lattice surrounding them. In the case of topological insulators, however, it was previously unclear whether getting rid of this energy happened faster in the conducting surface than in the insulating core. “So far, we simply didn’t have the appropriate experiments to find out,” explains study leader Dr. Sergey Kovalev from the Institute of Radiation Physics at HZDR. “Up to now, at room temperature, it was extremely difficult to differentiate the surface reaction from that in the interior of the material.”

In order to overcome this hurdle, he and his international team developed an ingenious test set-up: intensive terahertz pulses hit a sample and excite the electrons. Immediately after, laser flashes illuminate the material and register how the sample responds to the terahertz stimulation. In a second test series, special detectors measure to what extent the sample exhibits an unusual non-linear effect and multiplies the frequency of the terahertz pulses applied. Kovalev and his colleagues conducted these experiments using the TELBE terahertz light source at HZDR’s ELBE Center for High-Power Radiation Sources. Researchers from the Catalan Institute of Nanoscience and Nanotechnology in Barcelona, Bielefeld University, the German Aerospace Center (DLR), the Technical University of Berlin, and Lomonosov University and the Kotelnikov Institute of Radio Engineering and Electronics in Moscow were involved.

Rapid energy transfer
The decisive thing was that the international team did not only investigate a single material. Instead, the Russian project partners produced three different topological insulators with different, precisely determined properties: in one case, only the electrons on the surface could directly absorb the terahertz pulses. In the others, the electrons were mainly excited in the interior of the sample. “By comparing these three experiments we were able to differentiate precisely between the behavior of the surface and the interior of the material,” Kovalev explains. “And it emerged that the electrons in the surface became excited significantly faster than those in the interior of the material.” Apparently, they were able to transfer their energy to the crystal lattice immediately.

Put into figures: while the surface electrons reverted to their original energetic state in a few hundred femtoseconds, the “inner” electrons took approximately ten times as long, that is, a few picoseconds. “Topological insulators are highly-complex systems. The theory is anything but easy to understand,” emphasizes Michael Gensch, former head of the TELBE facility at HZDR and now head of department in the Institute of Optical Sensor Systems at the German Aerospace Center (DLR) and professor at TU Berlin. “Our results can help decide which of the theoretical ideas hold true.

Highly effective multiplication
But the experiment also augurs well for interesting developments in digital communication like WLAN and mobile communications. Today, technologies such as 5G function in the gigahertz range. If we could harness higher frequencies in the terahertz range, significantly more data could be transmitted by a single radio channel, whereby frequency multipliers could play an important role: They are able to translate relatively low radio frequencies into significantly higher ones.

Some time ago, the research team had already realized that, under certain conditions, graphene – a two-dimensional, super thin carbon – can act as an efficient frequency multiplier. It is able to convert 300 gigahertz radiation into frequencies of some terahertz. The problem is that when the applied radiation is extremely intensive, there is a significant drop in the efficiency of the graphene. Topological insulators, on the other hand, even function with the most intensive stimulation, the new study discovered. “This might mean it’s possible to multiply frequencies from a few terahertz to several dozen terahertz,” surmises HZDR physicist Jan-Christoph Deinert, who heads the TELBE team together with Sergey Kovalev. “At the moment, there is no end in sight when it comes to topological insulators.”

If such a development comes about, the new quantum materials could be used in a much wider frequency range than with graphene. “At DLR, we are very interested in using quantum materials of this kind in high-performance heterodyne receivers for astronomy, especially in space telescopes,” Gensch explains.”